The End Is Near

I cannot believe that it's the last day of 2015. What a year it has been! It's been a busy one but also a productive one. As is my habit, this last post of 2015 will be a bit introspective -- but first, an update on the WIPs, neither of which is likely to be done by midnight. 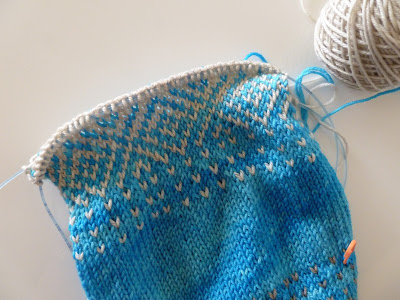 I am planning to spend most of my knitting time today on this project, and I'm hoping to have it finished either before we leave to return home or shortly after we get back.

Then there's a new project, which I cast on for on Tuesday -- a new pair of striping socks in Fibernymph Dye Works Bounce (and, incidentally, she currently has an end-of-year 20% off sale going on now). This colorway is After the Harvest (Brights). 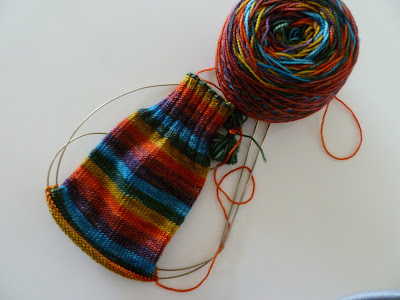 I got the cuff done on these on Tuesday, but all of the leg you see here was done at the movies last night -- I only have half an inch left to knit before it's time to start the heel. These will be coming with me on the plane.

So now that the WIPs have been wrangled, it's time for introspection.

As I said before, it's been a very busy year. I set myself some rather lofty design goals for the year, and in spite of all that life has thrown my way, I managed to meet most of them. I had an extremely productive year of designing, for one, publishing 17 new patterns (including three in third-party publications) and bringing my total design portfolio to 50 patterns. I don't know that it's a feat I'll manage to duplicate in 2016, but I'm really proud of myself for putting in all the extra work to get it done.

Another goal I set for myself was to keep blogging regularly, and I think I've managed three posts most weeks. I know that the age of knit blogging has waned in some respects, and there have been times when I've considered shutting down the blog for good, but I am glad I've kept up with it. I know people are reading (and thank you so much for doing so!), even if comments are much more rare than they used to be -- and frankly I'm guilty of not commenting myself on the blogs I read, given how much time is at a premium and I often find myself skimming to stay up to date. I know I still get excited when a post gets a comment, so I'm going to try to be better about leaving them in the new year.