When this posts, I will officially be on vacation and won't have to be back at work until January 4. I will relax once we get to our final destination (and that won't be until after we get up extremely early tomorrow to leave for the airport), but for now there's the usual worry that I will forget to pack something. Now in the case of most things, like clothes or toiletry items, that's not a big deal -- there are lots of stores in Florida, after all. What there are not a lot of are yarn stores, however. I did find one about 10 miles away from where we're staying, but it does not look promising (I have a feeling I'd be likely to find a lot of cotton and novelty yarn), so that means any yarn I want to have available to me has to be packed in my suitcase.

Packing knitting and yarn for a vacation is always a challenge. There's a delicate balance that you want to achieve: You want to have enough so that you have options and you don't run out before the end of the trip, but you don't want to pack too much so that you end up just taking the yarn on a long trip. I know a skein of yarn doesn't take that much space, but we're going to be away for two weeks, so I'm taking more than a skein. Here's what I've allocated: 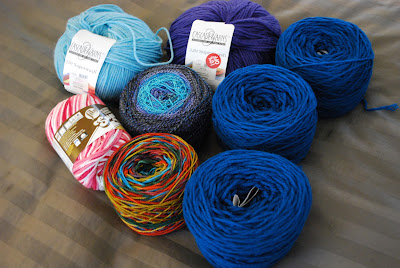 What you see here is three skeins of Cascade 220 for Rainbow's Romane and Roman, a skein of Fibernymph Dye Works Bounce for socks to be named later, two skeins of Cascade 220 Superwash for a double-knit cowl for Rainbow, a skein of handspun for socks, and ball of kitchen cotton should I feel the need to knit some dishcloths (which could be left at the house and thus free up a bit of space in the suitcase for the return trip). What you do not see here are the two WIPs, my handspun socks and the colorwork cowl. So that's enough yarn for at least seven projects. Realistically, I'd say it's unlikely I'll finish all of them -- so why do I still feel nervous about running out of yarn?

I didn't finish my last skein of handspun, but I at least got the singles done, so I'll be all ready to ply when we get back. 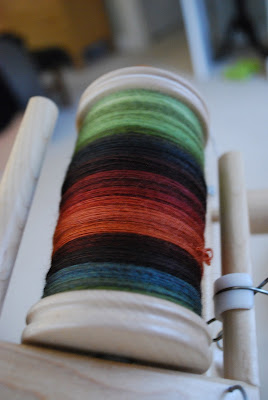 I'm off to finish up the packing and then to get to bed early (so that 4-something wake-up call doesn't seem quite so horrible). Have a good rest of the week and I'll "see" you again from Florida!
Posted by Sarah at 8:21 PM