Time to Buckle Down

I don't know about you, but any time I've got a project planned with a deadline and I think "I've got plenty of time!" it always ends up being a mad dash at the end. I think that might be the case with the Sweet Gemma blanket I've been working on for my friend's baby. I purposefully did not take it to work on when we were away in December because I figured that I would start it as soon as we were back, and it was only nine squares, after all. I guess I neglected to factor in my interest in casting on new things and and my ability to get distracted, because I now find myself less than two weeks away from my friend's due date and I'm only just about to finish the third square. I am hoping that, given that this is a first baby, my friend will go a little past her due date so I can get a little more time (and of course I'm sure she won't mind if I don't give her the blanket right away -- especially considering she doesn't even know about it). But I'm also focusing much of my time and energy on getting this done. 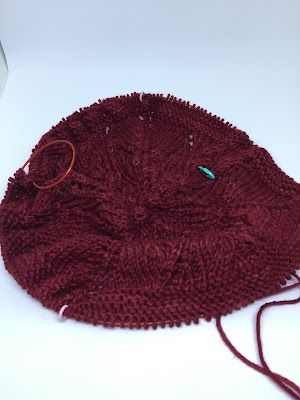 I finished off the first skein of yarn and joined the second partway through this third square, and for the first time I used a Russian join (I've known how to do it for quite some time, but just never got around to using it) to avoid having to try to weave in two extra ends in the middle of all the patterning. I did not much like the appearance of it on the first round when I knit it in, but it did seem to blend in more as I knit a few more rounds (save a tail that's poking out some, but I'll just trim that later). 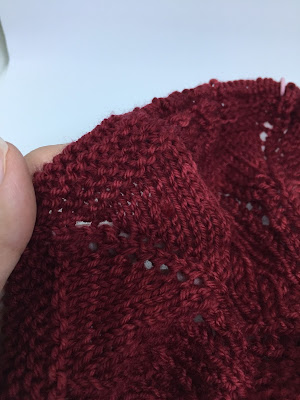 What I like about it is that I really was able to minimize the amount of yarn used in going from one skein to another; normally for this kind of thing I'd do a felted join for the same reason, but that wasn't an option this time because this yarn is a superwash. I think I may be able to get five squares out of the first two skeins of yarn, which means I'll likely get the whole blanket done using only four skeins, leaving me an extra to play with -- perhaps to knit a matching baby sweater.

Meanwhile, Rainbow's Dancing Leaves Cardigan has moved back into its lunchtime knitting position, at least for this week. I'm nearly through all the waist shaping and approaching the end of my third color on the body. The body is now about half the total final length. The sweater is going to be a bit large on her when it's done -- I'm making the size 8-9 -- but I'd prefer her to have some room to grow so that she can get a couple of years of wear out of it. 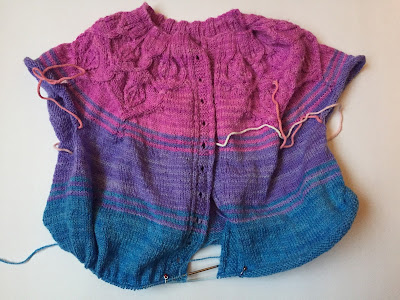 While the rows are long and do take some time, they are pretty mindless at this point. Once the waist shaping is complete, the only thing I need to pay attention to is the button bands, and they're pretty simple. I've peeked ahead at the sleeve instructions, and they have very little shaping involved, so they will be fast and easy as well. I'd really hoped to have this sweater done for the winter, but the fabric is so light that I think Rainbow will be able to wear it comfortably (even though she runs warm) through the spring and even maybe in the summer when there's aggressive air conditioning.

Though I really have no business casting on anything else right now, I started another pair of socks on Sunday. I've recently discovered that while I'm sitting with Rainbow as she falls asleep in the evening, I can knit (provided it's something I can do without looking) and read a Kindle book at the same time. I don't get a huge amount of knitting done this way, but at least on the nights when she's restless and I'm sitting there for a long time, I don't feel like I've wasted half the evening. 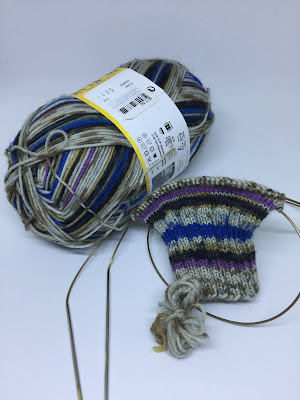 The yarn is one of the Arne & Carlos colorways from Regia that were hot for a while last year. I bought it from my LYS before they went out of business in a total impulse buy. I'm not a huge fan of the faux fair isle look, but I know that these will wear like iron. Now that I'm a little past the ribbing, the self-patterning is starting to show up a little. I'm not sure I really like the colors or the patterning just yet, so perhaps these will be knit and then used as a gift or donated.

Now if you'll excuse me, I have a blanket sitting here that won't knit itself!