Off Kilter but Full

I'm definitely in the home stretch on my Merry Month of Minis spinning. As of this writing, I have five minis left that are lined up to be spun and one full bobbin. 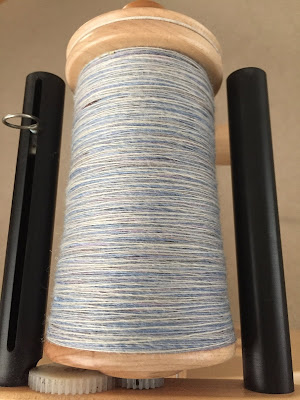 For once, the uneven-looking bobbin in this shot isn't due to perspective. Rather, it seems that my WooLee Winder needs a bit of an adjustment to wind on evenly. You can see that there's still a fair amount of room at the far end of the bobbin, but there's no more room at the near end, so I figured this would be a good place to stop. I'll start a new bobbin for the remaining minis, but all the singles will eventually get plied into one big skein.

If you're looking closely at the numbers on the little slips of paper that go with each fiber mini, you'll notice that there are two days missing. I decided to leave out two of the minis that I opened this week: 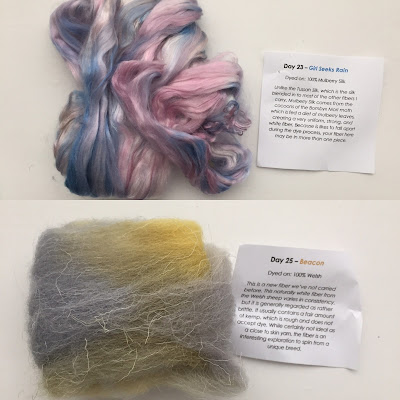 First, there was a beautiful mini of 100% Mulberry silk, and I decided that I wanted to save that to either to spin on its own or to blend in with something else. The other mini was Welsh, which is fairly rough/coarse and hairy, and it didn't really feel like the rest of the fiber, so I just left it out; perhaps I'll combine it with the Karakul at a later time.

Part of me really wants to keep spinning until I finish the last five minis, but I also know that I have some sleeves to be knit!
Posted by Sarah at 4:17 PM