Much knitting happened over the weekend, so I have actual visible progress to share on the Mister's Neighborly Cardigan!


Both fronts have now been completed, and I've cast on for the sleeves. I'm knitting them at the same time, on the same needle, to ensure that they come out identical. On the one hand, this means they will take twice as long, but I'll also be done with both at the same time (isn't the worst thing about knitting a sleeve having to knit a second one?). The sleeve progress is entirely from Sunday evening; I didn't touch them last night at all because I was busy working on something else. But I'll be picking them up again tonight and seeing if I can get through the rest of the 1x2 ribbing at the cuffs and move on to the much faster stockinette.

The other project that jumped on my needles yesterday is my first official Giftalong project, and it's a little something for Rainbow. You may remember that when we picked out yarn for her Hyphen sweater earlier in the year, we also selected a coordinating skein of yarn in fingering weight to knit a matching sweater for her American Girl Doll. Rainbow's birthday is a week from Saturday, so I thought that if I cast on now, I could have it done to give to her as a gift (she does know that I had the yarn for the sweater, but she doesn't know that I've started it, so it will still be a surprise). Here's where it was as of the end of my lunch break yesterday: 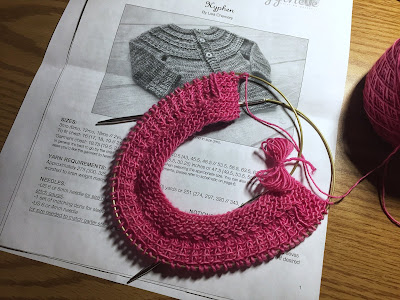 I have since added another increase row and another band of the stitch pattern and put the sleeve stitches on waste yarn. I'm using some notes from another Raveler but also winging it a bit -- I had to steal the doll from Rainbow's room last night while she was sleeping to hold the WIP up to it and check the fit. Fortunately I think it'll be close enough, and blocking will help. The one benefit of knitting for a doll is that it's unlikely to complain if the fit isn't perfect -- not to mention that this sweater will never be outgrown! Considering that I only cast on yesterday and have already divided the sleeve stitches from the body, I think this will be done fairly soon.
Posted by Sarah at 10:43 AM