Today is July 4, Independence Day here in the United States -- a commemoration of our country declaring its independence from Great Britain. I'll readily admit that I'm not feeling particularly patriotic or festive this year, given some of the things that are happening on our southern border, but I don't want to get too political here. Suffice it to say that I'm just enjoying having what Rainbow used to call a "home day" with the family.

It's been a fairly quiet day here. We were all up a little late last night (Rainbow because we decided to have a family movie night and the adults because we knew we wouldn't have to get up early for work today), so we slept in and had a leisurely breakfast. I went for a long walk, more than an hour and probably close to four miles, late this morning and then spent some time at my wheel, trying to finish up my current spinning project before the start of the Tour de Fleece on Saturday.

This evening, before we go to see the fireworks (provided they're not canceled by storms that might come through), I'll be continuing to work on my Soldotna. I've been struggling to get a picture of it that accurately captures the colors, so I played around with this one using my photo editing app. 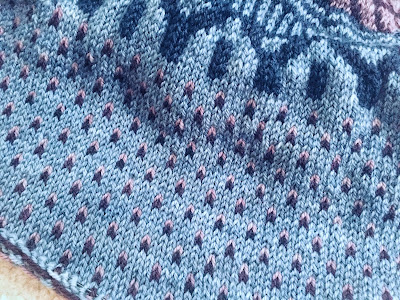 This isn't perfect, but at least it's not as washed out at this WIP usually appears. The light blue is a little less bright than it looks, though I think my playing with the color makes it easier to see that the polka dots, as it were, are actually two colors -- one round with the light purple and one round with the dark purple.

I put about half the body stitches onto another circular needle last night so that I could try on what I've done so far and get a sense of how much longer I want to make it. Right now, it's hitting just as the end of my rib cage, so just short of my high waste. I've still got enough of the light blue left that I can make it longer, and I weighed it after the last pattern repeat I finished so that I can weigh it again after the next to see how much I use for each repeat. I figure that I can also add some additional length in the ribbing at the bottom, and I'm thinking about using the dark purple for that rather than the dark blue because I used so little of it in the yoke and still have a pretty full skein. I toyed with the idea of reserving some of the light blue to lengthen the sleeves, but I think I'd rather have a longer body than longer sleeves and a shorter body. Thoughts on my plan are welcome and encouraged!

If you have today off, I hope you're spending it in a way that brings you joy!
Posted by Sarah at 5:11 PM