Typically at this time of year I devote nearly all my crafting time to spinning in an effort to be as productive as possible for the Tour de Fleece. This year, however, I'm just not feeling it as much. I am spinning, but not in every spare moment. This is mainly because I have knitting projects that I really want to get done and I'm dealing with time pressure on design projects. You saw what I've been spinning in my last post, and frankly my bobbin doesn't look much different two days later, so I'll spare you an update. Let's turn back to the knitting.

I'm still working on Rainbow's shortie socks at lunch, though they haven't progressed too much. What I'm really focusing on this week is my Soldotna Crop, which is close enough to done that I think if I can just buckle down for a few evenings, I should manage it. It saw some attention over the weekend while the Mister and I finished up the new season of Stranger Things. 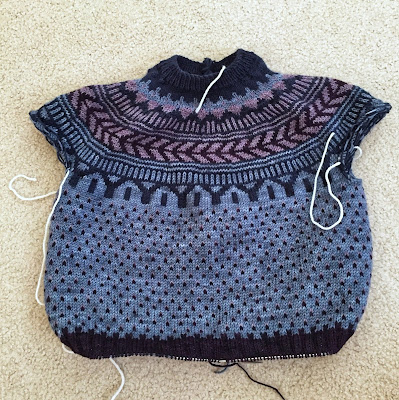 I have about a round and a half of the body ribbing left to knit before I'm ready to bind off. I ended up saving a bit of the light blue so that I can add a bit of length to the sleeves. I'm planning to knit two rounds in the light blue, then add in the dark blue and make the sleeve cuffs look like the bottom hem of the sweater (so two rounds of stranded work with both colors before doing the ribbing). I'd estimate I have between two and four hours of work on this left, between knitting and weaving in ends. I'd say it's doable to get this done this week.

One of the reasons I'm so anxious to finish up this sweater is because I really need to get started on the next one -- and that's the one I'm designing. I did swatch again, using size 6/4.0 mm needles, and came up with a fabric that's not quite as dense (meaning that colorwork portion won't be bulletproof!) and a gauge that will make the calculations a lot simpler. 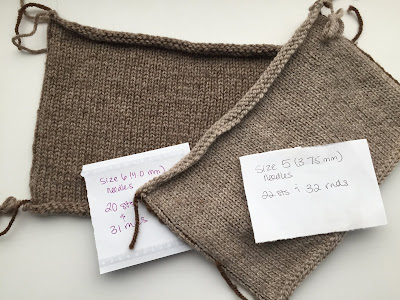 As you can see, the fabric is still a good density, and going up just one needle size has taken me from 5.5 to 5 stitches per inch. In addition to making my job easier, I think this gauge will also make the pattern more accessible to multiple weights of yarn -- not to mention that it will knit up a bit faster! Now that I've settled on my gauge, I can start calculating all the stitch counts and get started on my sample. I'd originally hoped to have my sample done and a draft of the pattern to my tech editor by the end of July, but I think if I aim for mid-August and she can turn the pattern around in about two weeks, that will still give me about six weeks for test knitting. It'll bit a bit tighter than I would have liked, but such is life.

Reading is still very much happening, and with the completion of a book yesterday, I have my first bingo! 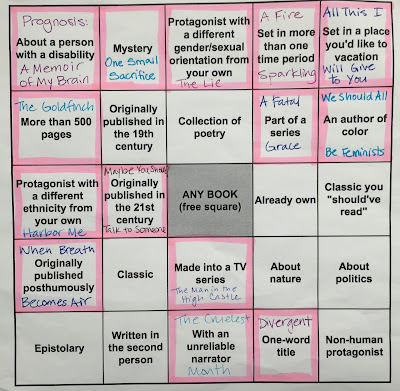 The book I finished yesterday is the one in the top left corner, Prognosis: A Memoir of My Brain. It was a freebie from Amazon First Reads, and I was pleasantly surprised (so many of those freebies end up being duds). It's a memoir about an Australian woman who sustained a traumatic brain injury and her challenges and life struggles as she recovered from it. I found it fascinating to get an insider's view of what it's like to have a brain injury and be aware of one's own failings. I gave it four stars. If it sounds interesting to you, I'll note that there's also currently a giveaway for it on Goodreads.

My next book will fill in the "Originally published in the 19th century" box. I started Twelve Years a Slave yesterday and am already really enjoying it. I am once again doing things in the wrong order -- I saw the movie when it was out a few years ago and am now going back to the primary source. The writing is very much of its time, so if you don't care much for "old-timey" language, you might not like this one. After that, based on Kat's glowing recommendation, I have Middlemarch queued up for the "Classic you should have read" box. I pondered getting the audiobook from the library, but it's a long book (I think something like 32 hours) and I knew I likely wouldn't get through it all before it was due back, so I went ahead and bought the $0.99 Kindle copy so I could read it at my leisure. I'm still thinking about how to fill a couple of these squares (anyone got any recommendations for "Written in the second person" or "Non-human protagonist"?), but I'm sure I can fill up most of this board by the end of the summer.
Posted by Sarah at 9:52 AM