We are home, after a bit of an ordeal, to be honest, and getting back into the swing of things. We flew home yesterday after a truly lovely and restful vacation. We'd booked a 1 p.m. flight, which would get us home in the late afternoon time frame, giving us all a bit of time to unpack and catch up on the mail and generally settle last night. Unfortunately, all did not go as planned. The flight was showing as on time, and we boarded the plane at about 12:30 and then taxied to the runway at a bit past 1 (though I wasn't too concerned just yet, because when the pilot had come on to welcome us onboard, he'd said that the flight was about an hour and 55 minutes from takeoff to landing, so I knew that even if we left after the posted departure time, we'd still be on the ground by our estimated 3:30 p.m. arrival). When we got to the runway, though, I noticed a long line of planes waiting to board. We were informed after waiting a few minutes that the backup was due to the air traffic controllers' trying to avoid congestion in the airspace because of some storms and rain on the west coast of Florida. Then we were put on a ground delay as the weather moved over us. In all, we were sitting on the tarmac for a bit more than two hours and finally took off a bit before 3. We landed around 5, and thankfully there were no hiccups after that. The Mister immediately went to get the car while Rainbow and my parents and I grabbed the luggage (which was already on the belt by the time we got to baggage claim),  and the five of us went directly to a restaurant in our neighborhood for dinner before heading home to unpack. Though we probably all could have gone to bed a bit earlier, we all got a good night's sleep and got everything done at home without feeling too rushed.

We did have to do some of the normal chores and errands today, but it's largely been a relaxing day. As has been the case practically every other year we've gone away in the winter, I had a strong urge to spin as soon as we got home, so I spent about two hours at my wheel today, working on the lovely fiber that was already in the process of being spun. I found it apropos that the colors of the wool are very similar to the colors of winter up north -- muted and moody. 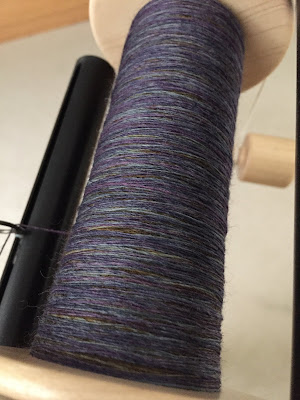 I've got about a foot and a half of combed top left to spin, and I expect that I will get in some extra time this week after being away from it so long.

One of my goals for 2020 is to really spin up more of my stash, particularly as I still have fiber coming in once a month from the Southern Cross Fibre club. This fiber, for instance, came in right before we left: 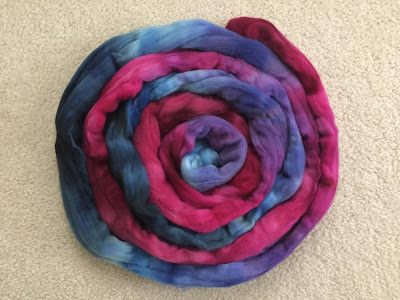 This one's called Pretty (aptly named!), and it's on South African Superfine Merino, which feels like kittens. It's actually even more vibrant in person, but it's a typical dreary winter day here, which does mute everything colorful.

In addition to getting to a lot of the hand-dyed fiber in my stash, I've also decided that 2020 will be The Year of the Fleece. I have quite a lot of unspun fleece fiber, some completely ready to spin and some washed but not yet processed. I have enough that I could knit several sweaters out of it, if I would just get around to spinning the yarn, so I have set myself some modest goals of spinning up several ounces of at least two fleeces. One is washed, carded, and already divided into 2 oz. bundles; one is the beautiful Romney/Romeldale cross I bought at MDSW 2018 that I've already sampled. I think I might wait until spring/summer for the latter so I can take my drum carder outside and leave the mess there, but I think you can expect to see the former soon. Hold me to that, will you?
Posted by Sarah at 3:32 PM