That Was Most Unfortunate

Today I'm asking you to forgive any errant typos you see in this post because I'm typing wounded: 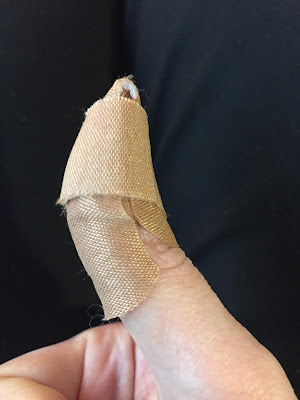 Last night, in a misguided attempt to save time, I decided to get out my mandoline (similar to this one, though my blade goes straight across) to slice some zucchini for my dinner instead of using my handheld spiralizer. It came with a hand/finder guard, which I foolishly decided not to use. And I paid for it -- I not only sliced the vegetables, I also sliced off a chunk of my thumb. And of course it's my right thumb, which is most inconvenient because I'm extremely right-handed. It's complicating pretty much everything I do with my hands, but amazingly I am still able to knit, albeit carefully. The Mister wondered if I should go to urgent care to get stitched, but there's really not anything to stitch together, so I think I'm stuck with lots of Bandaids for the time being.

Once I was fully bandaged up, I managed to finish up a blanket square, save weaving in ends (which I don't yet have the dexterity for) and blocking. I'm hopeful I'll be able to accomplish both this weekend. 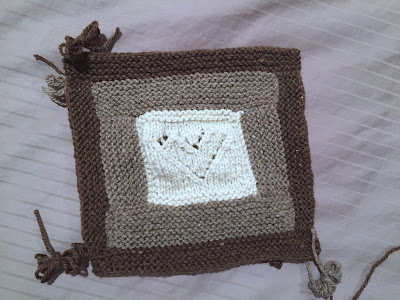 This square is going to be part of a comfort blanket for Amy of the Ross Farm, and I used leftovers of Ross Farm Shetland yarns for all of it. The lace panel at the center is a heart, which should open up a bit after blocking. The blanket was the brainchild of my friend Lisa (the dyer behind Fibernymph Dye Works), and the two of us will be seaming all the squares together into a blanket and delivering it to Amy.

I had a little bit of time before bed after I bound the square off, so I started a dishcloth. It's also a project on my 20 in 2020 list and it counts for a knitalong I'm participating in, so I feel like I'm multitasking. I've only gotten a handful of rows done so far, and I appreciate that it doesn't look like much yet. 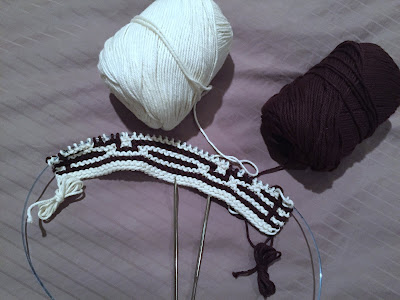 I'm using this pattern and two skeins of the Knit Picks Dishie I bought in the Great Kitchen Cotton Acquisition of 2019. The colors are Coffee (deep brown) and Swan (natural white). I expect that when it's done, Rainbow will inherit it; in addition to her obsession with sloths, she's also quite enamored with hedgehogs.

Because the knitting is rather boring at the moment (and also won't photograph well) and it's Thursday, how about we talk about reading, specifically the three books I've finished so far this year?
Up next is my first Ann Cleeves book, Raven Black (the first in her Shetland series). My hold from the library very conveniently came up this morning, just in time!
Posted by Sarah at 10:02 AM