Today I'm joining Carole and friends to talk about three things, this time in two areas of my life.

First, the knitting. I have three knitting WIPs in rotation at the moment (I have fourth project in progress, but it's my crochet granny square and I'm ignoring it at present). The one getting the most attention right now is my Darkwater, which now has a completed body and most of one sleeve -- just two more sets of decreases to go! 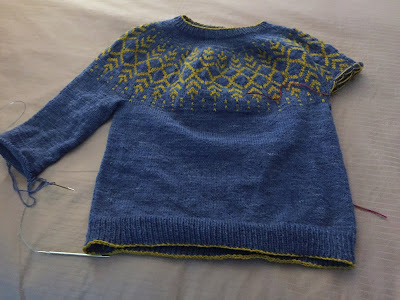 Because my row gauge was off compared to the pattern -- I have more rows per inch despite using a thicker yarn than called for -- I did recalculate the rate of decreases for the sleeves so that I wouldn't wind up with ape arms. I've been trying the sleeve on as I go, and the fit is good, with just enough positive ease. Sometimes I'm a little surprised when things like this work out, but I really shouldn't be given that I'm doing math and not just making it up as I go along. I am hoping that I can get enough knitting time in this weekend to maybe get through the second sleeve.

The other active WIP is my Louisette Socks, which should be finished today! I have about half a pattern repeat and a cuff to go on the second sock, and if I don't get through that during my lunch break today, I should have no issue finishing up this evening. In comparing the second sock to the first to check my length, though, I discovered a rather unfortunate error in the first sock. Can you see it 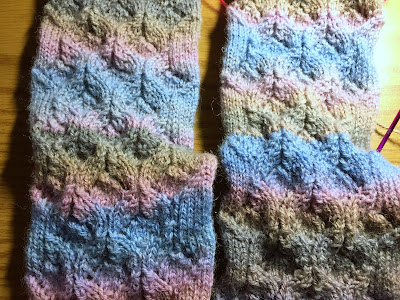 Where that red box is on the sock on the left shows you where I somehow skipped two rounds of the pattern right at the bend of my ankle. Oops. I'm not ripping this out to fix it, and I doubt anyone but me will even notice, but I might eliminate two rounds on the second sock to make them the same length. After all, I've regularly worn a pair of socks in which one sock is an entire pattern repeat shorter than the other and it took me at least a couple of years to realize that it wasn't just a matter of gauge.

The last WIP is my Brackthaw mittens (or, rather, mitten), which has not gotten any attention since I last shared it with you. Once the socks are done, I'll be taking the mittens to work for my lunchtime knitting to ensure that they see some progress. When I cast them on, meeting the KAL deadline seemed like no problem, but suddenly late March is a lot sooner than it used to be!

Earlier in the week, I finished The Book Woman of Troublesome Creek, which I was lucky enough to get a "skip the line" loan on from my local library. I did enjoy this book, and I especially appreciated that it taught me about two things: the Kentucky Pack Horse Library Project and the Blue Fugates of Kentucky. I ultimately gave the book 3 out of 5 stars because while I liked it, I was a little disappointed that some of the issues of race weren't handled better and I felt that the ending was wrapped up a little too neatly to be realistic. The author also took some liberties with historical record, though she is very up front about in her author's note. Mary has alerted to me to the fact that there's apparently a bit of controversy about this book and a strikingly similar novel published by a more well-known author, so now I'm tempted to read the other and form my own opinion.

I am a little more than 70% through the sixth book in Louise Penny's Inspector Gamache series, Bury Your Dead. After (e)reading the very first book, I've consumed the following four via audiobook, all read by the late Ralph Cosham. He's an excellent reader, but I found that I missed seeing things on the page, particularly French Canadian names whose spellings I can't always predict from hearing them. What I'm finding really interesting as I read this book is that it seems to be very much written in order to be read aloud, almost as if Penny intended it to be an audiobook. There are quite a lot of sentence fragments used for emphasis. The editor in me is also cringing quite a bit about commas that are either missing or misplaced, but when reading an ebook I never quite know what was actually written and what was an error caused by the conversion process. I hope the finish the book today.

Up next for me is Say Nothing: A True Story of Murder and Memory in Northern Ireland, a rare hardback physical book for me (thanks to a hand-me-down from my father). I heard about this book and put it on my want to read list a while back, and my interest grew after reading Milkman last year. This is a nonfiction work about The Troubles in Northern Ireland, so I'm sure it's going to be rather dark and difficult to read. I will likely have to read or listen to something else that's more fluffy and lighthearted at the same time so I don't get too depressed.

That's all for me until later in the weekend! I hope you'll share what you're knitting and reading in the comments!
Posted by Sarah at 10:00 AM