Last week I mentioned that I was feeling a little bit of a loss of my knitting mojo. I'm still feeling a bit like that, though I did spend some time since then working on my Wonder Woman Wrap, and it's grown a bit since you last saw it. I am nearly finished with the second middle stripe (which involves short rows) and have added quite a few ends that will need to be woven in at some point. 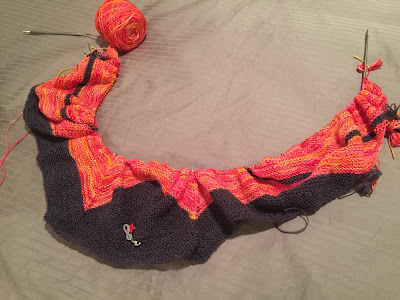 I'm also still making good progress on my "sportsball" socks; the first one got finished today. 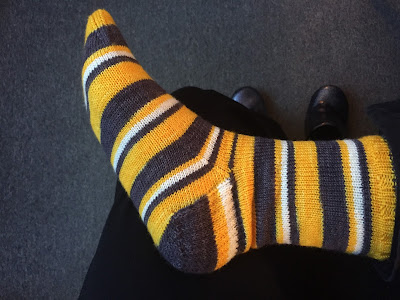 Over the weekend, however, when I was not spending time at my wheel, I was doing something rather surprising, if you know me. I was crocheting. Yes, I'm serious! I've long wanted to use up a bunch of worsted weight wool scraps in my stash to make a huge felted tote bag that I can use to toss WIPs in, and this weekend I finally decided to do it. I found a bunch of full or partial skeins of feltable wool in one of my stash bins, pulled out a big hook, and got to it. I'm hooking this from the base up, and I'm totally winging the pattern, so don't ask me what I did to get it to this point. 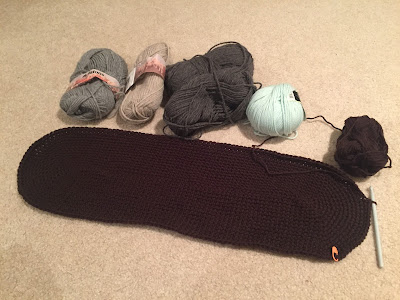 This dark brown was a lone skein of Ella Rae Classic that my Ravelry stash page tells me I bought back in 2008. I originally had four skeins, though I have no idea what happened to the other three. My plan is to continue with the base until this skein runs out and then stop increasing at the ends when I join in the next color. The other scraps I've pulled are mostly partial skeins of the now-discontinued Patons Classic Wool Merino as well as a lone ball of Jo-Ann Sensations Tesoro leftover from a Baby Surprise Jacket I knit for my cousin when he was born (he's now 10 years old), all of which were purchased a decade ago. I know I still have plenty of wool scraps left in the stash, and I'm sure I'll be digging them out once I get through this little pile.

I am enjoying the crocheting, something I'm not very good at but that goes very quickly, though due to my lack of practice I find that I have to look at what I'm doing, which doesn't make for a good activity when I'm watching TV at the same time and want to see what's happening on the screen. I'm feeling very virtuous for how much yarn I'm using up and removing from the stash as well. I've never been able to throw away leftover yarn when I complete a project if there's a decent amount remaining, so my stash is full of partial balls and scraps, many of them very well suited to a project like this. While I doubt that knitting will ever be replaced as my first love, I can see how I could very easily get addicted to this type of project!
Posted by SJ at 6:03 PM