The Good, the Bad, the Ugly, and the Un-freaking-believable

The Good
I finished up the second sleeve of Blanche-Neige last night (all but a few ends to be woven in). I was in such a good rhythm and my needles were flying so fast that I hardly paid attention to ER, which is one of my favorite shows. Dr. Carter was even back on this episode! But I had eyes only for my knitting. 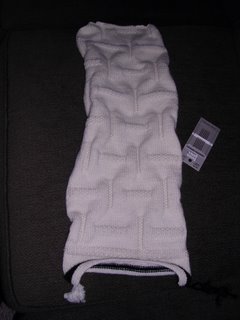 Since that was done, I brought my second pair (well, the first sock of the second pair) of Jaywalkers to work for my lunchtime knitting, and soon discovered that I was ready to start the toe decreases. So I need about another hour on that and I'll be finished with a sock.

The Bad
I had to start using my last ball of yarn to finish the second sleeve. That means when I was done, I was left with approximately three quarters of a ball (let's estimate maybe 100 yards, if I'm lucky). Call me pessimistic, but I don't think that's going to be enough to knit both border sections of the fronts. I was hoping that a full ball might do it, but I think it would have still been close.

The Ugly
In spite of the fact that I deliberately bought more yarn than I thought I needed, I'm still short. And the knitting gods must be laughing at me for being so complacent that everything was working out so well at the beginning. Because Knit Picks does not have any more Merino Style in Vanilla left in stock. Yes, you read that correctly. In fact, they won't have any more in stock until 3/17 (which would be even funnier if the color I needed was a shade of green). So in all likelihood, I won't be able to get more yarn in the same dyelot and furthermore by the time I get it and finish the knitting, it'll probably be too warm to wear the darn thing.

The Un-freaking-believable
(And I use that term so as to avoid cursing and annoying J, who doesn't like me to have a potty mouth.) In my previous life as an elementary school teacher, I got a lot of interesting gifts from my students around the holidays. In most cases they were things I would never use, but one student and her family gave me a great gift: an amaryllis. It's one of those bulb plants that has long straight leaves and has a stalk with multiple blooms. You see them a lot around Christmastime. In any case, when they gave it to me in December 2004, it was still a baby and was ready to start blooming in a few days. I took it home, put it on top of the bookcase in front of the window (which gets very good light), and took care of it. It bloomed beautifully and looked gorgeous, but eventually dried out. But then a second bloom happened, which was just as lovely as the first. When that stalk dried out, I decided to keep watering the plant because the leaves were still green and frankly I didn't know if it would bloom again. I cut off the dried out flower stalks and kept giving it the same attention. In the intervening time, I had a couple of the outside leaves turn yellow and dry out, so I cut them off, and I had about two or three new leaves shoot up from the inside. Not very exciting, but it was still green and alive, so I kept watering it.

Then, Wednesday evening, I brought my bottle over to water it and saw this: 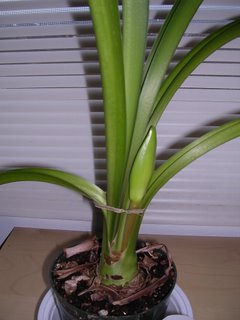 Yes, that's a bud! It's going to bloom again! I don't know if these plants are supposed to bloom more than once in a lifetime, but you bet your butt I'm going to keep it around to find out. I'm thinking that now it probably deserves a sturdier, roomier pot to live in. Once the weather gets a little warmer I'll replant it.

And back to The Ugly
I'm going to take this opportunity to send out an impassioned plea to the knitting community. I am in dire need of more Knit Picks Merino Style in Vanilla. I am very concerned that even when they get more in stock, it won't be the same dyelot, and as this is needed to knit the front part of the sweater, it'll be very obvious if it doesn't match. I am hoping that someone out there has one ball -- just one ball! -- of this yarn (Knit Picks Merino Style, Color Vanilla, Dyelot 59136) that they'd be willing to part with. I'd be happy to pay you for the yarn and the shipping, or arrange some sort of trade if you'd prefer. Please, help put Blanche-Neige together!