After taking Blanche in to work for some feedback from my fellow work knitters, I did a bit of surgery on her Thursday night. Specifically, she got herself a little bit of a neck lift: I sewed a series of small vertical seams around the back of the neck to reduce the total amount of fabric and make the neck stiffer. It seemed to work moderately well, or at least well enough to wear it to work on Friday. Here are some more shots, courtesy of J: 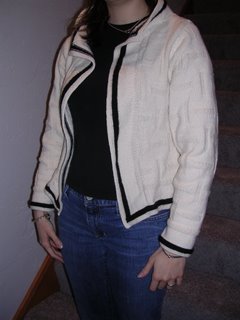 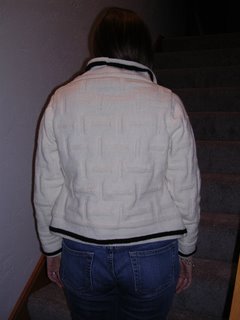 The neck is much better, but I'm still rather dissatisfied with the front border sections. There are still a couple possible fixes to try, including another attempt at blocking or (Miriam's suggestion) sewing some grosgrain ribbon along the back of the black stripe to make it stiffer. For now, Blanche has been relegated to the closet until I feel strong enough to deal with her again. At least she got a good reaction from everyone who saw me wearing her on Friday. Those who knew I'd knitted her complimented me, and those who didn't know I'd knitted her didn't ask me if I did (and if they didn't suspect, that leads me to believe it looked a whole lot better than I thought).

In the meantime, I've been focusing on socks, and lots of 'em. First on the list was finishing Jaywalker #4 (the mate for pair #2). All that required was one more knitting session during lunch today, and voila: 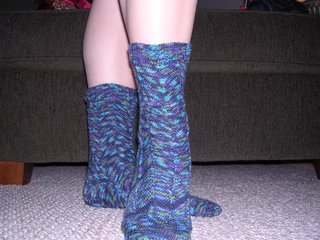 (Like my attempt at foot modeling?) These are for me, if you couldn't tell, and now that I'm done I'm all charged up again to knit a second sock for J, the companion to his Gentleman's Plain Winter Sock. I was finally able to show him the first completed one this weekend and he tried it on for size. It fit him perfectly. It was snug, but a) it hasn't been blocked yet, and I fully expect it to relax a bit when it is, and b) he likes it snug so it'll stay up. He was especially pleased with the fact that the ankle band wasn't too tight; the first pair I made him were toe-up, so the bind off row was around the leg and admittedly I bound off a little tightly. I figure I can finish the second sock up this week and have a finished pair for him by the end of the weekend. I guess then it's time to start another pair for moi? I do have some Lorna's Laces Shepherd Sock that is just calling my name from within the stash...

P.S. Is anyone else having serious issues with Blogger and uploading photos? It took me over an hour to get this post up because of the three pictures.
Posted by Sarah at 8:15 PM