I have conflicting emotions about sharing the following with you, which I'll explain later. But, as I've been talking about it so much over the course of the last month, I don't think I can get away with just pretending like it no longer exists. So, I give you this: 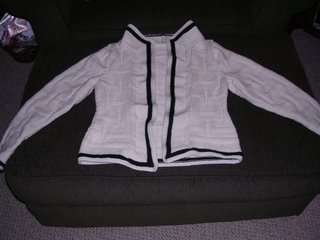 Pattern: Blanche-Neige by Axelle de Sauveterre, Winter '05 Knitty
Started/Finished: February 10/March 21
Yarn: Knit Picks Merino Style in Vanilla (100% merino wool) and Elegence in Coal (alpaca/silk)
Needles: Addi Turbo 32 in. circs, US 2
Mods: The yarn, obviously, because frankly I could not afford the designer's hand-dyed cashmere. I also eliminated the beading in the border rows in favor of simple -- but elegant -- stockinette.

You will notice there is not a picture here of me wearing the sweater. There's a very good reason for that. When I finished weaving in the last end last night, I held up the sweater and smiled. And then I tried it on. It was not pretty. To put it mildly, the collar/border is a disaster. It hangs open on flops over on itself, and in short looks nothing like the picture in the pattern. I need to find some way to fix it so that it will lie the way it's supposed to, be that weaving in reinforcing yarn to make it stiffer or sewing up some portions of the collar to make it smaller. Right now the "neck" is falling about three inches from the end of my shoulder. Any and all suggestions would be welcome!

My main beef with this pattern is that the yardage was way off. If you've been following my Blanche saga, you knew I ran out of yarn before I was even close to being finished. Thankfully I was able to fine some additional Merino Style (and frankly, even though it's a different dyelot, I can't see any difference). In all I think I used about 13 skeins of the Vanilla, plus nearly all of the Coal (although that was entirely expected).

I have to be honest and say that I was really discouraged when I put the sweater on and looked in the mirror last night, but when I told J about it, he reminded me of the bigger picture: I finished my first sweater. Really, other than the border, it fits perfectly and the seaming looks good. Next one I try will definitely have a normal neckline!

Now that Blanche is (mostly) out of the way, I am focusing on socks for a while. My second/fourth Jaywalker is about an inch from the heel, and I have to cast on for J's second gray sock. I'm also experimenting with another Knitting Vintage Sock pattern to see what becomes of it. Apparently it's a common obsession: when I sat down on the bus this evening, I noticed someone knitting a sock. Then I looked again, and realized it was Jen! She is very close to finishing Tubey, but needed a diversion. Trust me, I so understand.