After the whirlwind that was the Tour de Fleece, I lost a bit of my spinning mojo. After all, I'd done so much of it that I was ready to get back to my knitting. However, this weekend, I forced myself to get back to the wheel to finish what was in progress at the end of the Tour -- this superwash merino from the Dyeing Arts, purchased from the Loopy Ewe. The colorway is called Mother of Pearl. 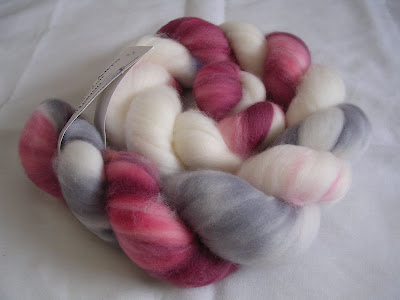 Once we found out Rainbow was a girl, I knew I wanted to spin this fiber up into a yarn that could be used to knit something for her. I ended up with a sportweight/DK-weight two ply, totaling approximately 205 yards. 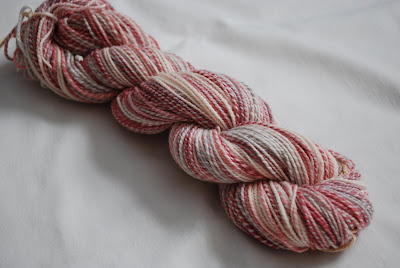 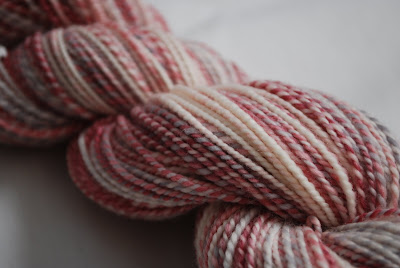 I had a significant amount left on one bobbin after plying, but I was too lazy to try to ply from both ends for more two ply, so I simply chain plied the remainder. The resulting three ply is approximately worsted weight, and the skein managed to get horribly tangled in the finishing process, which is why I don't have it in a pretty skein in this photo. However, as it's only about 28 yards, it should be easy enough to untangle when I decide what to do with it. 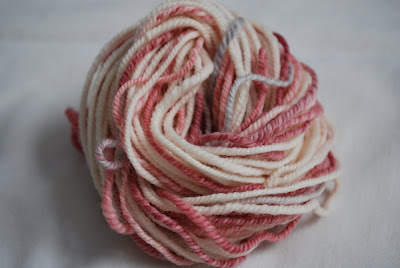 I haven't decided yet what to knit with the main skein. I don't think it's enough for a sweater, so perhaps a hat and mitten set will be in order. I'm open to suggestions!
Posted by Sarah at 7:47 PM