You may have caught a reference I made last week to untangling some purple yarn and noticed that I never mentioned what it was for. That's because I was doing some secret gift knitting; now that the gift has been received, I can finally reveal just what that purple yarn became. 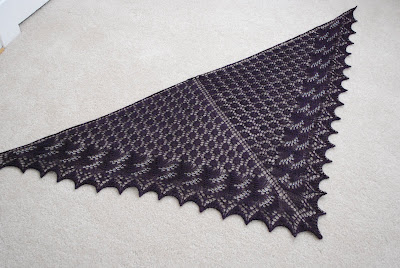 You may remember that Jess sent me a very generous package of purple yarn scraps to help me finish my sock yarn blanket. Included in that package was an entire skein of Hazel Knits Artisan Sock in a beautiful plummy purple. When I didn't need to break into it to finish a square for my blanket, I knew that I had to use it to knit something for Jess. You see, she's had a very difficult year, and I was so touched by her generosity that I wanted to send her a little something pretty in return in the hopes that it would brighten her day a bit. I was itching to knit some more lace, and the yardage in this skein of yarn seemed to be right on.

The last time I knit this shawl, I included the nupps and used approximately 400 yards, so I thought the one skein of this yarn would be enough. Unfortunately, as I began the border chart, I began to panic that I was going to run out of yarn. Rather than completing the shawl as written and having to do several rows in a different yarn, I did the first two rows of the border chart and then skipped to the last two rows. That turned out to be a wise decision, because once I was through with the bind off, this is all that was left. 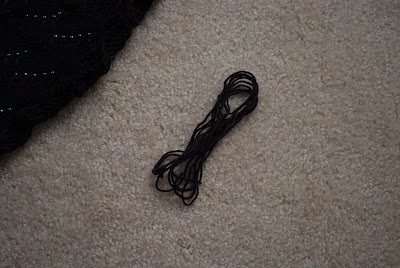 The shawl looked positively tiny immediately off the needles, but I blocked it severely, as per usual. I love the results. 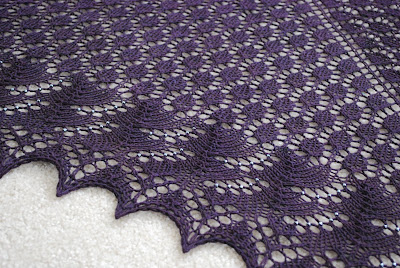 I decided to substitute beads for the nupps in part because I thought it would save yarn, but I also was excited to see how the substitution would look with this particular pattern. I used the crochet hook method and size 6/0 hematite seed beads. They're not nearly as textural as the nupps would be, but they do add a nice bit of shine and just a little bit of weight. 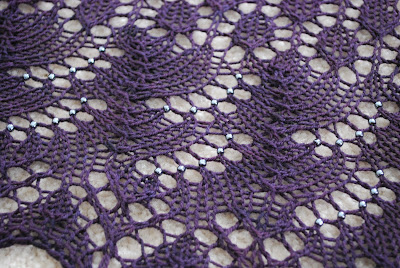 I don't think that the mods to the edging detract too much from the look of the overall shawl. Although I certainly wish I'd had enough yarn to knit the full border, the effect of the scalloped edging is the same, and I think the smaller size of the edging really emphasized the Lily of the Valley section -- my personal favorite. 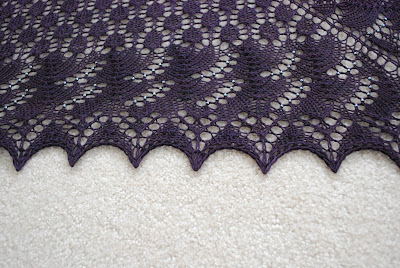 The pattern was just as fun to knit the second time around as the first, and this time it went even faster. With the exception of a little bit of time at home one evening, doing the cast on and set-up rows, all the knitting on this shawl was done during my prework and lunch hour knitting times -- approximately two hours a day. Overall, it's a winner. The knitting was fun, the resulting shawl exceeded my expectations, and I got a very surprised note from the recipient that really made my day. 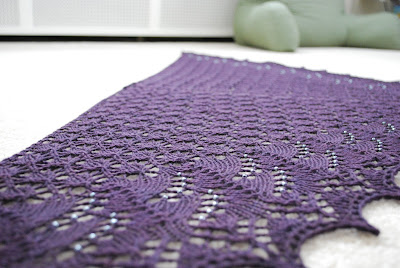 Call me crazy, but I think I need to make another one of these for myself, and soon!
Posted by Sarah at 7:55 PM