What a weekend! As a MDSW virgin, I found there to be a lot to take in at this festival, but all in all I had a great time. The weather was perfect (mostly sunny and in the low 70s), the company was fab, and the shopping was spectacular!

I drove down on Friday afternoon with my friend Yvonne, who was kind enough to let me not only mooch a ride from her but stay with her and her friend Kim as well. We settled in to our hotel room, did a bit of knitting and chatting, and then headed out for a delicious crab cake dinner at G & M Restaurant (when in Maryland, one must eat crab cakes!).

The next morning, we were up bright and early (I actually woke up on my own at the time I normally get up during the week!), had a quick breakfast at the hotel, and were at the fairgrounds by 8 a.m. Though the festival technically didn't open until 9, they were letting people onto the grounds by then. Some vendors were already open, though we headed straight toward Jennie the Potter's booth because Yvonne had sleuthed out that she had a limited number of MDSW mugs featuring a crab in addition to the traditional sheep. Her booth wasn't opening until 8:30, so we stood and waited while we chatted with the folks who were helping her to set up. It took me a few minutes before I realized that one of the helpers we were talking to was Amy Singer -- yes, that Amy Singer. (Yvonne promptly made fun of me for being star struck at this point.)

Our mugs in tow, we headed next to the main barn, where Yvonne and Kim went to see the Miss Babs booth and I went in search of spinning things. By 10 a.m., I had found pretty much everything I'd come to the festival in search of, though I did spend the rest of the day looking around and picked up a couple bundles of fiber. Want to see my haul?

The main thing I wanted to find at the festival was a lazy kate for my miniSpinner. I had heard from other mS spinners on Ravelry that the Nancy's Knit Knacks Katie-a-Go-Go would hold the WooLee Winder bobbins, so I was in search of one. I found one at the Mannings' booth, where I got to watch Henry Clemes of Clemes & Clemes spin on one of their wheels while waiting in a very slow-moving line. 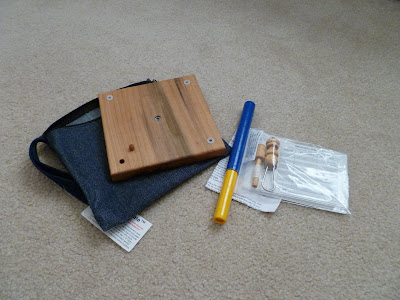 I was also potentially interested in buying a spindle or two at the festival, and one I was particularly interested in looking for was a Jenkins Turkish spindle. I found this beautiful one at the Carolina Homespun booth (very fitting, as that's who sold me my Lendrum three years ago). 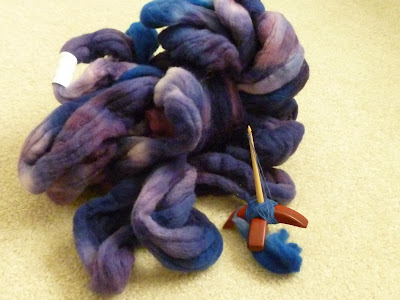 Isn't it gorgeous? It's Bloodwood and 0.95 oz. and positively tiny compared to the spindle I learned on. The fiber on it is some cormo I picked up later in the afternoon at the American Cormo Sheep Association booth. I am just enchanted by how the cop of spun singles is wound onto this type of spindle. 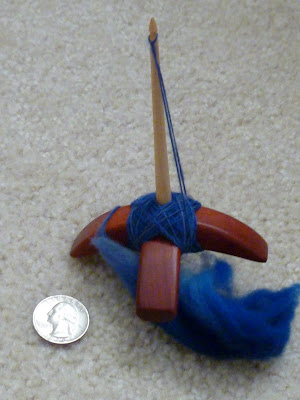 I should have been satisfied with my one beautiful spindle, but I was shopping with Colleen, a new spinner, at that point, and we both went a little crazy when we saw the Bosworth booth. I ended up buying this 1 oz. Redheart Midi (I started spinning on it that evening with some Gale's Art corriedale blend). 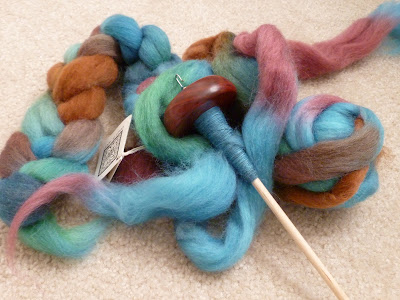 Now, I was not really a spindle spinner before this, but in using these two new spindles, I discovered that buying good tools really does make the process easier. I can now say that I am hooked! 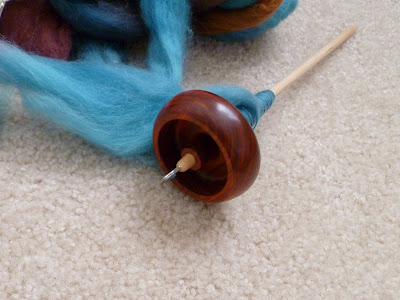 We left the festival for the day a little before 3 on Saturday because we all wanted to sit and relax for a bit. I ended up going out to dinner with some family friends Saturday night while the rest of the crew went to a Thai restaurant they'd found and loved last year, but we all met up in the hotel room later to knit and chat.

We were up again fairly early on Sunday morning, but as we had to pack up the cars with all our stuff and check out of the hotel before we left, we didn't get quite as early a start as we did the day before. It ended up not mattering much, as we still got a really good parking spot and all of us had already done most of our shopping. We headed to the Fold's booth, now that the crazy line from Saturday was gone, and I made my last acquisition of the trip -- a tiny 1 oz. bundle of Tussah silk from Blue Moon Fiber Arts in the colorway Pepe le Plume. 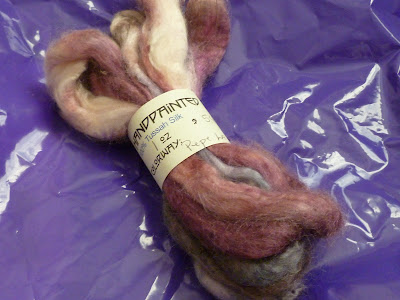 Okay, that's not true -- technically, there was one more acquisition, but I don't have anything to show you. Why, you ask? Well, here it is: I bought a fleece. Yes, I caved and bought a fleece. My friend Jenn, who is new-ish to the Hurricane Knitters and who knows about fleeces because she spins and also used to have sheep, was volunteering at the fleece sale and enabled me helped me to select a good fleece. I picked up a lovely cream-colored Romney fleece that was marked 4 lbs. but actually weighed in at 5 lbs. when I took it to the processors. It was a good price, in my estimation ($32 total, which translates to about 40 cents an ounce), and it's now in the hands of Ozark Carding Mill, where it will be washed and carded into roving and then delivered to my door in roughly 12 weeks.

Yvonne and I got on the road, this time with Steven in the back seat, at about noon, and she dropped me off at home at about 4:30. It was a beautiful day for a drive, and I even managed to finish the back of my Essential Cardigan on the way.

So, all in all, I'd say it was a very successful weekend. My wallet came home a bit lighter, but I'm very satisfied with my purchases and am not suffering from any buyer's remorse. I really enjoyed the festival and the company, and I know now that this is going to be an annual event as long as I can swing it.
Posted by Sarah at 7:44 PM

Email ThisBlogThis!Share to TwitterShare to FacebookShare to Pinterest
Labels: MDSW