Spinning Outside My Comfort Zone

My latest handspun yarn was all about spinning that is not my usual. This Coopworth came as the March shipment from the Crown Mountain Farms fiber club; the colorway is called Hittite Kingdom. The fiber felt very springy in the hank, so I decided to try to spin it as a thicker two ply, thinking it would make some great mittens. In the process of spinning it, I found that it was really difficult to spin a consistent single, mostly due to a lot of nepps. Because I was trying very hard not to spin my default yarn, I left most of these nepps in, figuring that they would lead to a more textured yarn. And that is just what I got. 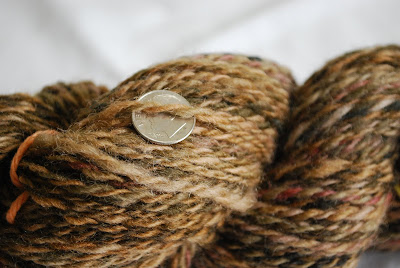 The finished yarn is probably around a heavy worsted weight and approximately 166 yards. It's a little underplied for my taste, but I think that's due to the fact that this was the first yarn I plied on my miniSpinner and I was clearly still getting the hang of it. I will say that the skein was balanced when I took it off the niddy noddy, so my taste in tight twist doesn't necessarily mean that there's not enough. 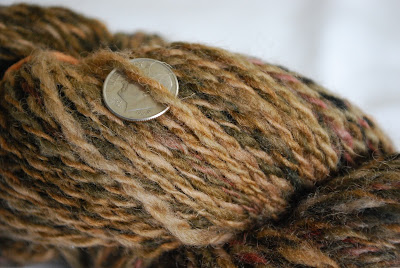 All in all, I'd call this yarn satisfactory. I didn't hate spinning this fiber, but I didn't love it either. I'm a bit noncommittal about the colorway, too, though it is neutral enough that whatever I make with it, be it mittens or something else, should go with lots of things.
Posted by Sarah at 8:49 PM