I'm not sure why it is, but I seem to have hit a knitting slump. I just don't have much of an urge to knit anymore -- mostly because all I want to do is spin! I have been diligently working on the projects that have deadlines, such as the handspun socks, which are finished and blocked and ready to be handed over to the recipient (that handover just has to be scheduled). I've also finished my two squares for the charity blanket. 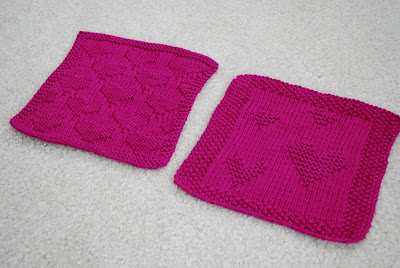 These are both adaptations of washcloth patterns I found on Ravelry, and I managed to get both out of less than one skein of Cotton Supreme (with leftovers, even). These will be shipped out to the U.S. coordinator on Saturday.
I haven't touched my Essential Cardigan sleeves in about a week, though I'm determined to pull them out at knit night tomorrow. I think my lack of desire to work on them might have something to do with the fact that we're in the middle of a 90+ degree heat wave -- even a lightweight sweater is completely useless in this heat! As I'm in no rush to wear it, I think it's probably okay if I take a little break, at least until it's back in the 80s.
It really has been all about the spinning lately. I'm nearly done spinning the singles from the most recent All Spun Up spinalong fiber (merino/silk -- luscious!), which will be chain plied when they're done, and I've been working on a long-dormant spindling project. And today, while I was home with Rainbow (daycare was closed in preparation for summer camp, so I took a day off), this arrived: 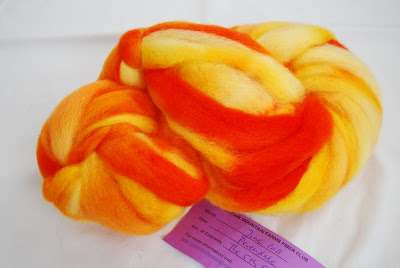 This is the June shipment from Crown Mountain Farms, Perendale (4 oz.) in a colorway called the Fifth Element. Yes, it really is that bright in real life! Should make for an interesting spin.
Posted by Sarah at 8:44 PM