Although technically it's not yet autumn, the week's forecast calls for a couple slightly cooler days (highs in the 60s) and some definitely cooler nights (lows in the 40s), so I feel completely justified in getting out my wool yarns and knitting sweaters and other warm things.

About a week ago, I cast on for a Baby Surprise Jacket for a baby gift for a coworker who is due in December. I haven't given it too much attention, so it's moving slowly so far. I've just started the increase section and I'm starting to pick up some steam, so I'm hoping to get it finished within the next week or so. I know the baby is not going to need it anytime soon, but I have quite a few baby items to knit in the next six or so months and I'd like to get them all done as early as I can. 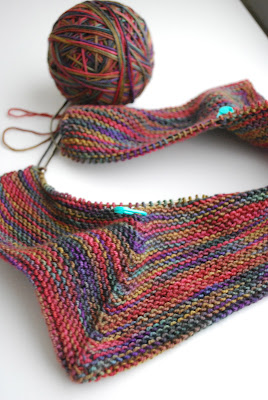 The next big(ish) project to go on the needles will be Roo for Rainbow. My swatching ended up giving me more problems than solutions. To get the specified stitch gauge, I probably would have had to go up to a US 9 needle, and in my opinion, that would have resulted in a fabric that was way too loose for this particular garment. Added to that is the fact that I really like the fabric density I was getting with a US 7, though my gauge is off. I decided to go with the fabric I liked and adjust for the gauge difference by knitting a larger size. Originally, I'd intended to knit the 24" size (Rainbow has a 20.5" chest but I wanted a few inches of positive ease in order for the sweater/jacket to fit over other clothes and allow her some space to grow). I cast on for that size and knit a few rows last night, and it looked like it was matching the finished measurements of the 22" size, so I ripped it. I'll cast on again tonight for the next size larger and see how that goes.

I did finish my Essential Cardigan last week but have yet to sew on the buttons (bad knitter!). It's really silly how about 20 minutes of work are standing in the way of my having a new sweater. I think I may have some residual feelings of resentment toward the sweater from all that miserable 1x1 ribbing, though, so it may need to sit in time out for a bit longer until I'm ready to face it again.

Finally, I'm getting another original pattern ready to go into the testing phase. At this point I am planning on self-publishing it on Ravelry, though I've been toying with the idea of submitting it to the Knit Picks Independent Designer Program because I knit the sample in Knit Picks yarns. Thoughts? I will let you all know when the pattern is going up for testing The pattern is now in testing here, in case you're interested, but in the meantime, here's a little preview: 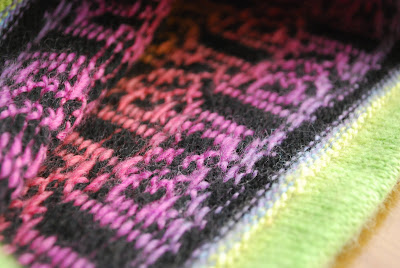