First, a public service announcement: Today it was so chilly outside (highs in the 50s) that I pulled out a pair of handknit wool socks to wear. Tomorrow's going to be just a tad bit warmer, so I'm planning on a long-sleeved tee and this shawl, which has been waiting patiently for me to wear it since it was finished. I think fall may have officially arrived.

Now, back to our regularly scheduled programming.

After posting the other night, I got out my purple yarn and cast on for Rainbow's Roo. (Technically I cast on again, because I'd started and done a few rows the night before and ripped it out after measuring and realizing it was going to end up too small.) I'm through about half a repeat of the chart on the back and have done one decrease so far, so it's definitely in progress now. I was a bit slow going at first because my brain and the chart were not cooperating, but now that we've straightened things out, it seems to be all smooth sailing. I'm also cabling without a cable needle, so that's making things quicker as well. My goal is to have this done by later this fall so Rainbow can actually wear it before she outgrows it, though that's iffy seeing as she is regularly refusing all sorts of things (like, lately, pants and anything with ruffles). She seems to be enamored of the yarn, though, to the point where I had to cut a small piece of it for her this morning so she wouldn't unravel and completely tangle an entire skein. 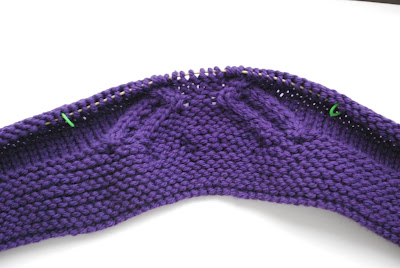 I've got a bit of a lull going in my design stuff (the one pattern is in testing, another submission is ready to go out the door), though of course the ideas have not stopped. Since watching Return to Cranford the other night, I've been obsessed by the shawls worn by some of the women, specifically the one worn by Judi Dench -- it looks a little like the one here, but there was almost a collar to it as well. I've got a rough sketch and a rough idea of how to execute it, but I need to sit down with some yarn and needles and swatch a bit to see if I can get it to work. If I can, I'm thinking I'll put it up on Ravelry as a free download, and in the meantime I can share the process with you here.
Posted by Sarah at 7:54 PM