Tonight's yarn has been done for a couple of weeks at least, but I completely forgot to photograph it until this weekend. This was the August shipment for the Crown Mountain Farms fiber club, 4 oz. of Gotland in a subtle colorway called Hammer of the Gods. The natural color of the fiber was a dark gray, so the dye job was not very dramatic, but all the same it was very pretty. Here was the fiber: 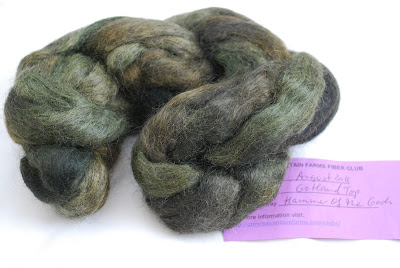 Much like the Lincoln I spun earlier this summer, 4 oz. of this fiber didn't amount to a lot volume-wise, so it was a quick spin. This was actually the first thing I spun after the conclusion of the summer contest, so I was eager to spin something that would be fast and easy. It had been a while since I'd spun a singles yarn (all yarn for the contest had to be plied), and as this fiber was long and wavy, it seemed perfectly suited to it. Though they can be frustrating (because you don't have the step of plying to even out the twist), singles yarns can be really satisfying because you spin up one bobbin and you're done. That was certainly the case with this yarn. 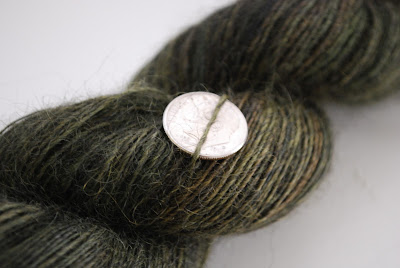 The color was nearly impossible to capture on camera, but you can see that it's a smooth, lustrous yarn. I slightly fulled it by throwing it in alternating hot and cold baths and then giving it a vigorous thwacking against the side of the tub; this helps to tame the twist a bit and help the yarn to hold together. The finished product is about 402 yards and really silky, though not particularly next-to-skin soft. I'll have to find the right pattern for it, but this spin was a success!
Posted by Sarah at 8:05 PM