All Handspun, All the Time

Although in truth I haven't been doing a whole lot of knitting lately (I've been too seduced by spinning while rewatching Downton Abbey season 2), the two current projects on my needles are, somewhat amazingly, being knit in handspun.

The first is my I Heart Aran sweater, which is being done in the Romney I just spun up in the last couple of months. I started with the back, which is plain except for the requisite ribbing at the bottom, so not very exciting thus far. 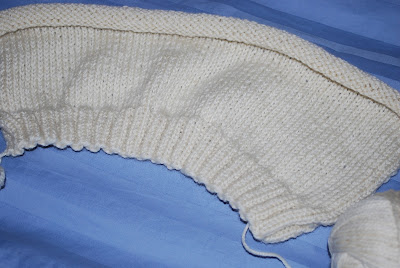 I'm just past the waist shaping, so now it's just knit and purl until I reach the length to begin the underarm shaping. Before I cast on for this, I was a good knitter and remeasured, and as it turns out, my bust size is a good two inches less than I thought it was -- which means I can knit a smaller size sweater and be sure that I have plenty of yarn. I might even add some length. Of course, the finished sweater will have zero ease (I was worried two inches of ease would be too much), so I might have to be a bit heavy handed when it come time to block.

My other project is a lot more fun to look at. I had two skeins of handspun in my stash that were just begging to be knit up together, and for months now I'd been intending to turn them into a Stripe Study Shawl. This past weekend, I decided the time had come to cast on, and I'm really glad I did -- this pattern is addictive! I partially blame it for the fact that I stayed up to watch all of the Oscars on Sunday night (and then was really, really tired Monday morning!). 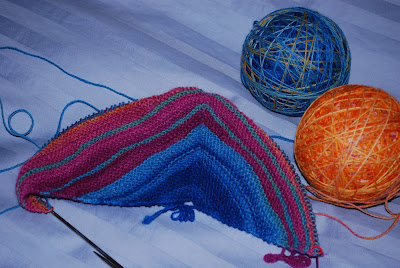 The colors are not quite true here because of the flash, but you can see the nice contrast I'm getting as well as how there are stripes within each stripe from the gradient in the yarn. My yarn is closer to a laceweight than a fingering, so I'm using considerably smaller needles (US 3 rather than US 6). I have way more yardage than the pattern calls for, though, so I can easily do more stripes to get the shawl to be the right size. This is going to be so cozy and bright when it's done; I have a feeling that it's going to be a regular accessory to my work wardrobe.
Posted by Sarah at 8:03 PM