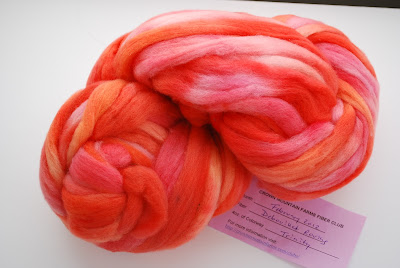 It's a bit toned down in person, but the colors are pretty vibrant. I split the roving more or less into thirds and started spinning up the singles last Sunday, I believe. I didn't spend a huge amount of time on it this week, but I'm working on the third bobbin now. 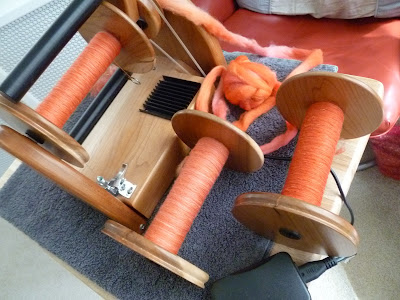 As you can see, I have about half a bobbin to go, so I will finish tonight or tomorrow, most likely. Unfortunately, it's not going as quickly as it could (despite the fact that I'm spinning on the miniSpinner) because this is roving, not combed top, and thus more susceptible to neps. There's also a fair amount of VM in it, so I'm stopping roughly every 30 seconds or so to pull out a piece of hay or a fuzz ball. It's mildly annoying to have to stop so often as well as to think about the waste stuff I pull out of the yarn. For instance, here's the pile of stuff I've removed just from the first half of the third bobbin's worth: 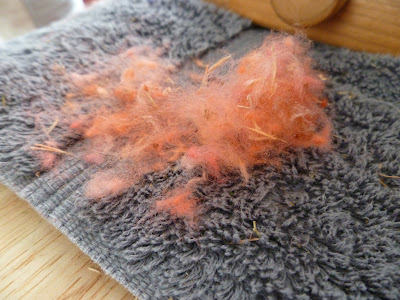 This doesn't include the small bits of VM that have fallen out on their own and onto my lap while I've been spinning, either. It's annoying, yes, but it's also part of dealing with wool. I think I've realized, though, that I really prefer a combed prep (combed top) to a carded prep (roving). I guess it's as good to know what you like in spinning as it is to know what you like in any other aspect of life!