Three patterns in three weeks! I swear I am not that prolific; by some happy accident several patterns that were in the works for several months all were ready to be published at roughly the same time. After this one, there are more in the works, but you won't see any of them for a bit.

In any case, the last of this bunch of three is another stranded colorwork pattern (I'm addicted, I'll admit it), the Teleidoscope Tam. This one is a great first project for someone who's just getting their feet wet with stranded colorwork, because there are only two colors and no long floats involved. 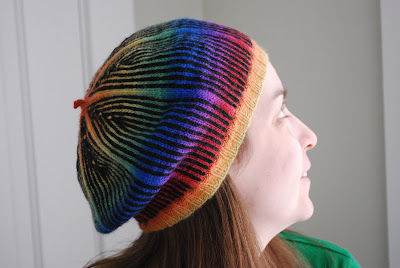 This is knit from the bottom up, starting with some simple 2x2 ribbing that transitions into the stranded part. There's some simple shaping on top of the crown, and the tam ends with a little nub of I-cord. 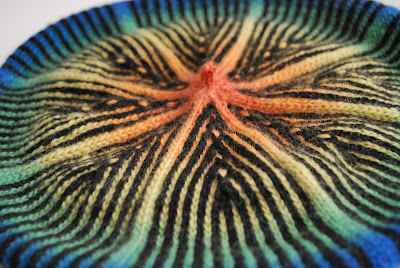 The tam is finished with a little gentle blocking -- over a small dinner plate, if you like, but I found that I could obtain just as good a result by laying it flat on a drying rack and patting it into shape.

I had such fun knitting up this hat -- I'm only sorry that the weather seems to be improving and I don't need to wear it to stay warm!