For about three weeks or so, my lunch break knitting has been Veera Valimaki's Stripe Study Shawl. This pattern had long been in my favorites/queue, and this past Valentine's Day, I decided to buy it as a gift to myself. I'm not sure what took me so long, because I knew exactly which yarns I wanted to use for it -- these skeins of All Spun Up polwarth that I spun last summer and the summer before: 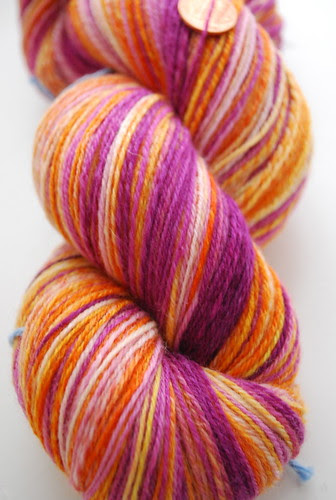 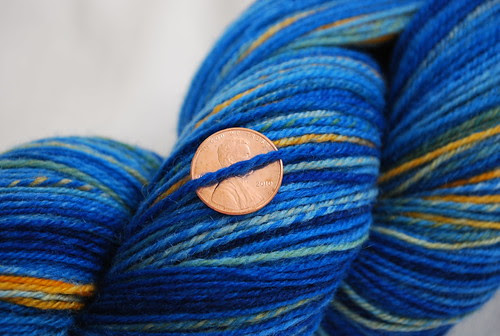 These were part of the summer 2010 spinalong that Kristin of ASU ran; the three colorways all had something to do with fish, and they were all stunningly gorgeous. These two were probably destined to be together because they both contained that stunning orange-y gold -- goldfish color, really.

I spent several hours over the course of a weekend winding the skeins up into balls (yes, I could have used my winder, but there's something to be said about handling your own handspun as often as possible!) and cast on while watching the Oscars. Once I got into the rhythm of what to do where, it grew quickly. Here it is as of late last week: 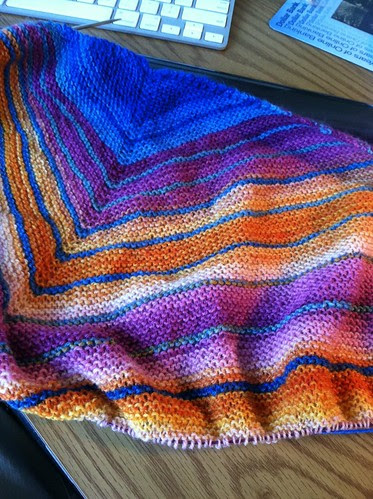 My yarn is a little lighter than the fingering called for in the pattern (really it's more of a heavy laceweight -- both 4 oz. skeins are 550+ yards), so I went down to a US 3 from the recommended US 6 to get a fabric that wouldn't be too flimsy. I am now approaching the end of the 11th stripe, I think, but I have pretty much decided to do more than the 12 called for in the pattern. I have a fair bit of GWAT left, and I've barely touched the ball of Koi Pond, so there should be plenty for maybe two or three more stripes as well as a generous border at the bottom. The challenge is figuring out just how much more to add, as I can't really tell just how big it is now, when it's still on the needles!
Posted by Sarah at 7:52 PM