A Case of Kismet

Remember how I was saying that I had the urge to cast on for a sweater? As luck would have it, I was trawling through the Free Pattern Testers group on Ravelry (I like to see what other people are doing) and happened to spot a test for this sweater that had just been posted. After considering for a second or two, I signed up. I can totally knock out a stockinette sweater in the next month or so, right?

I'm using Cascade 220 that's been in my stash for at least four years -- I bought it at the Pittsburgh Knit and Crochet festival the last time I went (which was definitely before we moved into this house). I can get Cascade 220 in every shade at my LYS, but the vendor I bought it from was a yarn store going out of business, so I got a steal: eight skeins for $40. Five of the eight were this pretty shade of blue; two were in a different blue and one was a greenish tan color. I'd originally intended to use them all in a sweater with some sort of colorwork yoke, but obviously the colors have never called to me over the years and all eight skeins have been sitting untouched in the back of my stash closet. 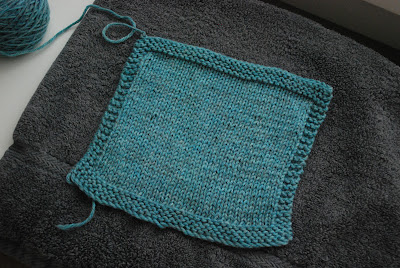 I swatched with US 7s (the size called for in the pattern) last night and dutifully washed my swatch, and it appears that over the years I have loosened in my knitting. Looks like I will have to go down to a size 6, which is actually my preferred size for knitting worsteds that are on the lighter side, like 220.

I am going to try to finish this up before the start of the Tour de Fleece, when I'll want to spin all the time. I don't think that should be that big of a challenge considering that (a) it's in stockinette in the round and (b) I have two days off this month that I planned to spend at my LYS knitting.

I also really need to finish up the sample for a shawl I've been designing. I am nearly to the end, and really all that's left to figure out is how big I can make the border with the yarn I have left. 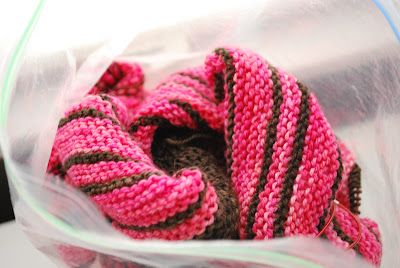 Finally, as an aside, remember all that knitting I did for Mad May? Seems it was worth it: This morning I logged onto my computer to the lovely surprise that I won (by way of a random number generator) first prize in the General Wee Ones knitalong! I guess I really should have played the lottery yesterday as well.
Posted by Sarah at 8:11 PM