Before I begin, let me preface this by saying that I'm battling a sinus infection and the medication I'm taking is making me a little spacey, so please forgive me if something I write today doesn't quite make sense.

For the past week and a half, I've mostly been spending my crafty time knitting (working on the test knit sweater, which now has a complete body and a sleeve and a half), but I've also put in a little time on the spinning project that's been on my wheel for way too long. A couple of months ago, one of my friends in my knitting group asked if I would mind spinning some fiber for her as a favor. The next time I saw her, she presented me with a 15 oz. bag of "natural wool roving" (or so the label said). I decided to take the quick-and-dirty approach to spinning it, basically just throwing it on the wheel to get what I could get. I finished spinning the last of the singles early last week and started plying on Thursday, I think. I've gotten in about two hours on it since then, and here's what I have so far: 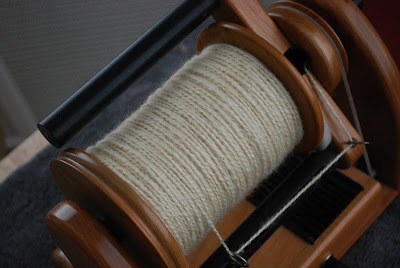 Keep in mind that this bobbin holds probably 9-10 oz., so you can get an idea of how easy and fast this stuff is to ply up. This may seem like a lot of yarn, but here's what I still have left on the two bobbins holding the singles: 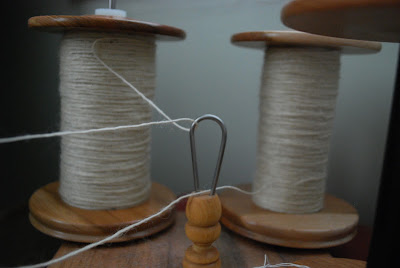 Looks like I will get at least two, maybe three, decently sized skeins of yarn out of all these singles. I am very interested to see how they will wash up, especially considering that the fiber was turning my drafting fingers black as I spun. I have no idea why, but whatever that was is bound to come out in the wash.

I'm sorry for the unintended radio silence on the blog this past week -- the Mister's been traveling for work and I've not been feeling well, so it was the kind of week where, once Rainbow was asleep, it was all I could do to turn on the TV and knit some stockinette in the round. The sweater has made good progress as a result, so expect to see some more of it in the week ahead!
Posted by Sarah at 3:27 PM