I've mentioned the fiber I was spinning for a friend at least a couple times (remember, the stuff that was turning my fingers black?). Well, I've finally finished it. The second skein was completed Friday night and skeined and washed yesterday morning, and today I have two dry skeins ready to be delivered to their owner. 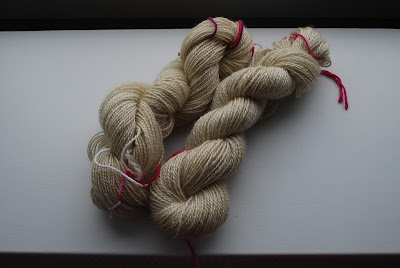 One skein obviously behaved better than the other when it came time to twist, as you can see.

Surprisingly, the yarn doesn't seem to have changed color much with washing, though the water was a bit cloudy when I drained it. Some VM did come out as well, but there's still a fair bit in there that I just could not pick out easily.

The finished yarn looks to be in the sport to DK range; to be perfectly honest, this is not the most consistent yarn, mostly due to a less-than-stellar prep, and because of the large quantity of it (and the fact that I just wanted it to be done), I did not take the time and care to make it more consistent. As a result, there's a bit of thick-and-thin action going on here. All told, there's a total of about 550 yards in the two skeins. 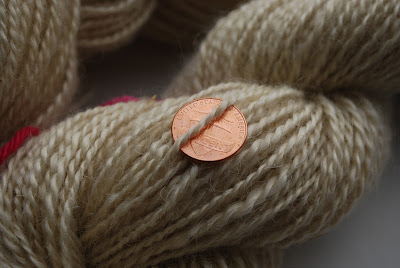 I still have no clue what breed of sheep this is. It didn't feel like anything I'd spun before, and this was the only information I had to go on: 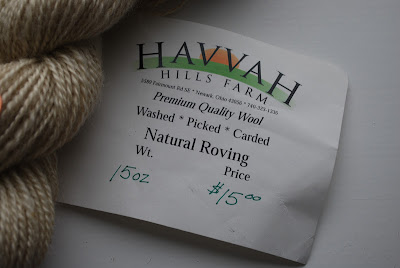 If I had to guess, I would say this was a meat breed and someone decided to try to make a little extra cash by selling the fleece as well. The prep was very odd -- the fiber was wrapped around itself in a flattened ball, but the strip of fiber itself was very wide -- and it was full of VM, much of which I either pulled out or fell in my lap while spinning. It was not a particularly pleasurable spin, but fortunately my miniSpinner made quick work of it. I was very happy to get it off my wheel before the start of the Tour de Fleece begins.

Which is a good thing, because I inventoried my fiber stash on Friday night and apparently I have a lot of spinning to do: