In case you were wondering, a bachelorette weekend at the spa does not make for good knitting time. I took plenty of knitting with over the weekend, as I usually do whenever I travel, but I completed very little. The only knitting I did at all, in fact, was done in the car to and from our destination, so I'm not nearly as far along on the baby sweater as I had hoped. I did, however, finish the lace portion, so all that's left to do on the body is the picot hem.

I expect that the knitting that's still to be done will go rather quickly (small sleeves knit in stockinette in the round? -- oh yes), so perhaps I'll be able to finish this up this week.

Meanwhile, because I missed a day of Tour de Fleece spinning on Saturday, I tried to make up for lost time the past two evenings. I finished the second of three bobbins of my Fat Cat Knits superwash Targhee: 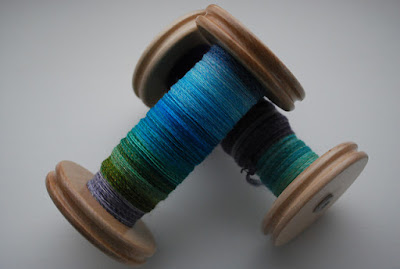 and I managed to spin the entire second bobbin of Southern Cross Fibre superwash merino in one sitting last night: 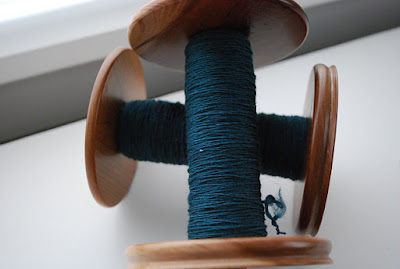 I did (just barely) start the third bobbin of FCK singles last night, but it was really only about 10 minutes' worth of spinning, so there's not much to see. The SCF singles are now ready to be plied, but I may let them sit for one more day. I do have to say that I didn't love spinning the singles, which was unexpected. Usually I love spinning superwash merino, but this batch was weirdly clumpy and even perhaps a bit felted in some spots, which made it hard to draft evenly. I'm not sure what was going on there. In any case, I'm happy to be nearly done with it.
Posted by Sarah at 8:27 AM