A Small Falling Down

Although I haven't officially declared myself to be on a yarn diet, I have been trying to make an effort to use up stash and work with what I already have rather than buy new yarn for new projects. Obviously I haven't been sticking to that too well, especially with the news that my LYS is closing (something about knowing that I'll have to travel more than a mile to buy yarn brings out the hoarder in me, I guess). I thought I was pretty restrained in my last purchase, but then I got invited to a special "friends and family" type of event last night, and I went a little wild.

I took Rainbow along with me, in part because I wanted her to pick out yarn for a new school sweater (you may remember that the one I made her last year shrank in the dryer, so its days are likely limited). I really only had two criteria for yarn: It had to be the right color (dark green) and it had to be machine washable. I was hoping to find a superwash wool, such as Malabrigo Rios or Cascade 220 Superwash, but we had trouble finding the right color or a large enough quantity. Ultimately, we ended up with four skeins of Berroco Vintage -- the last four skeins the shop had. One is a different dyelot from the other three, but I figure I'll just alternate it with one of the matching skeins in the body. 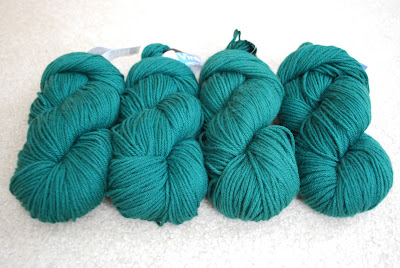 Normally I'm not a huge fan of knitting with acrylic blends, but Rainbow really liked the feel of this yarn and it probably will hold up pretty well to the abuse this sweater is likely to see, so I'm dealing with it. I've used it for a sweater for her before, too, so I know she won't complain about it being itchy or uncomfortable. I'm planning to use it to make her another Gramps Cardigan, a pattern I've knit quite a few times and that always comes out well. I'm going to knit a size 8, the largest size in the pattern, with the hope that she might get more than one year of wear out of it.

Rainbow also made some selections of her own last night. For starters, we picked up a pair of 16 inch circular needles for her so she can learn to knit in the round, and she picked out these two skeins of yarn (Cascade 220 and 220 Superwash) for a hat and pair of mittens. 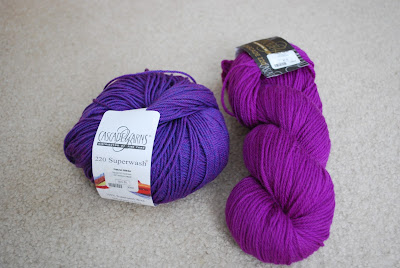 I wasn't planning on buying anything for myself, but I ended up making a couple of impulse purchases. First, I was drawn to this fiery skein (appropriately named Vesuvio) of Manos del Uruguay Marina, a beautiful merino singles lace yarn. I'll likely save this for a lace design of some sort. 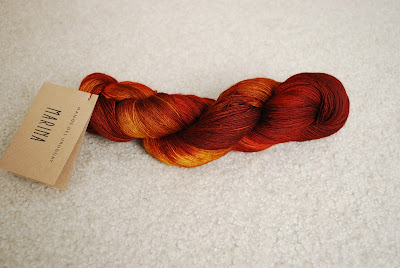 Then I grabbed these two skeins of BMFA Woobu in Bleck to make a Driftwood Tee, something I've wanted to knit since the issue of the magazine the pattern is in came out. 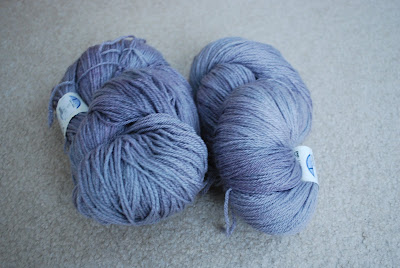 I also bought a pair of Addi Rockets and some buttons that Rainbow picked out. I do want to note that I did not buy any fiber this time, though I was tempted! And I don't feel particularly guilty about adding to the size of the stash, because chances are good that once my LYS closes, I won't be spending much time in a yarn store for quite some time.
Posted by Sarah at 5:56 PM