Still in a Daze

It's Thursday, and by now I've at least somewhat come to grips with the fact that in a month or so, my LYS will be no more. I want to thank those of you who left comments or messaged me with your commiserations. I know what's happening here has happened many other places and it's really not the end of the world, but I'm still feeling the loss even though it hasn't happened yet. Frankly there are plenty of other places I can buy yarn, including other LYSes that are relatively nearby (though none as close or convenient as my LYS), but what I'm really mourning is the loss of the community. I have spent at least several hours every week at my LYS, almost since it opened, and am friends with almost everyone who works or teaches there as well as many of the regular customers. I've participated in knitalongs, spin-ins, charity knitting drives, classes, and special events there. I've gotten help with knitting problems and received praise when I've gone in with an FO to show off. I've been introduced to new yarns and fibers, new tools, and even new crafts. Above all, I've received friendship and support, and I'm going to miss those most keenly.

On top of this, I am still without a computer at home. My laptop is currently sitting in a plastic bin covered with rice in the hope that it will absorb any water that I didn't get out fast enough, and I have an appointment at the Apple Store on Saturday morning to get it checked out. I figure the worst-case scenario here is that I have to buy a new computer, which would certainly be a hit to my checkbook but not a disaster. My laptop is several years old already and has been doing some odd things, so it's likely I would have needed to replace it in the not-too-distant future. I've been managing to stay on top of things with my iPad and work computer, but design work (with the exception of actual knitting) has been put on hold for the time being because all my files and charting program are on the laptop.

I'm still working on my shawl, and it doesn't look all that much different from the last time you saw it, though I've added quite a few rows to the body. 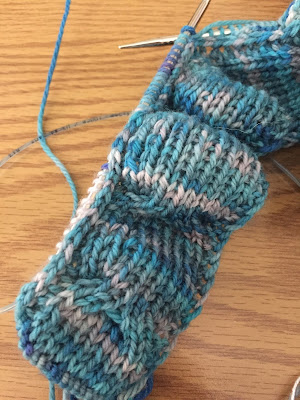 I can now see the end of the unworked stitches on the sides, so the short rows will soon be coming to an end. Once the body is done, I want to play with the bottom edge a bit and see if I can add a little something more to it.

Finally, I wanted to mention that it looks like I'm going to make my Stash Dash goal! I'm less than 200 meters away from hitting 7K, so I just need to finish one current project (the shawl, the handspun socks, or a new spinning project) to pass the finish line!
Posted by Sarah at 5:25 PM