A Turn for the Better

First off, the good news -- I am posting this from my brand-new, tea-free laptop! It turns out that there was significant corrosion in my previous computer, enough that it would require quite a lot to be replaced. As the computer was almost five years old and the cost to replace all the necessary parts was fairly high, we decided that it made more sense to just buy a new one. Thankfully, most of my data was backed up (the last backup was a few days before the tea incident, so I only lost a few minor things that are easy to replicate) so I can pretty much pick up where I left off. 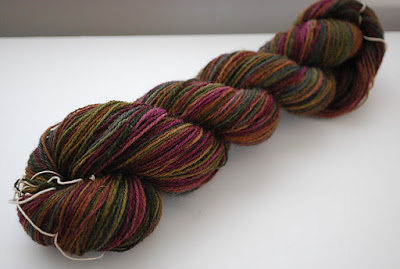 I'm quite happy with it, even though it's not exactly my colors, but I'll be putting it into the "to sell" pile and I'm hoping it'll make someone else quite happy.

I started spinning the most recent SCF club shipment on Monday night and put in a little bit of time at the wheel just about every evening this week. I'm not as far along as I'd hoped, but I should be able to finish it up this week. This is a rather bad photo, as it's been gloomy and raining all day and I had to use the flash: 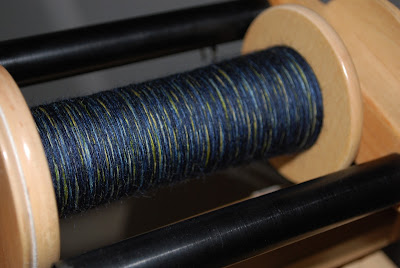 This colorway is called Short and Stout (yes, as in "I'm a Little Teapot"), and it ranges from that deep navy blue you see on the top layer to a bright almost peridot green. I've stripped the top lengthwise and am spinning all the strips one after another; I'll chain ply when I'm done. I was a bit concerned that I might have made a poor choice in my plying technique, as this Perendale is a bit long in the staple and spins up a little wiry, but my plyback testing is showing that it should be okay.

Of course, there's plenty of fiber in my stash already and more coming in every month, so we know I don't need more fiber, but some did come home with me from my LYS yesterday afternoon. I'd been eyeing this braid for at least the last month, and given that the store will be closed in a month, I thought it wise to grab it while I can. 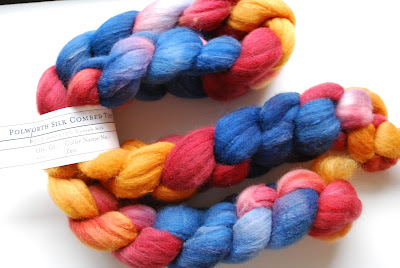 This is Polwarth/silk -- probably my favorite blend to spin -- from Yarn Hollow in a colorway called Zen. This photo doesn't do it justice, I'm afraid. I'm planning to spin this from end to end and chain ply it to preserve those beautiful colors and then knit myself a shawl or cowl or something else I can throw around my neck and cuddle.
Posted by Sarah at 5:51 PM