All the Little Needles

If I had to pick a theme for my vacation knitting, it would be little needles. I've got two projects in progress, and they're both being worked on size 2.5 mm needles or smaller. Luckily I am totally comfortable with these small needles, but it does mean that I don't get a lot done in a short amount of time.

After numerous knitting missteps (including another one last night that required me to tink back most of a row), I am finally done with the cabled portion of Rainbow's Dancing Leaves Cardigan. On top of that, I've also finally transitioned to the second color of the gradient. 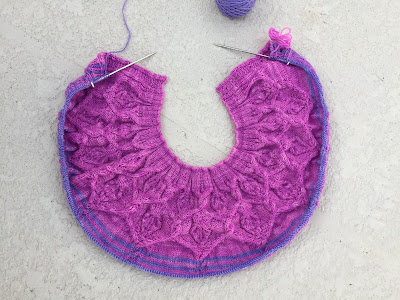 I decided to transition to the new color by doing two rows of each as my yarn supply of the previous color ran out. I was questioning it, but Rainbow says she really likes it, so I'll keep going. I'm glad the pink lasted as long as it did, though, because I think the stripes obscure the cables quite a bit. Here's a closer look: 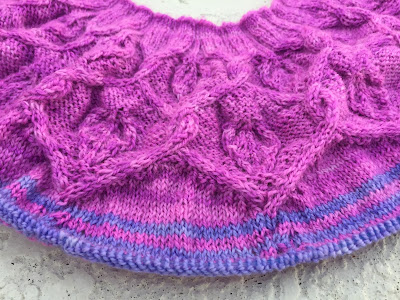 I am really counting on blocking to help make the cables a little more crisp; right now, they're fairly lumpy bumpy and don't pop much off the background 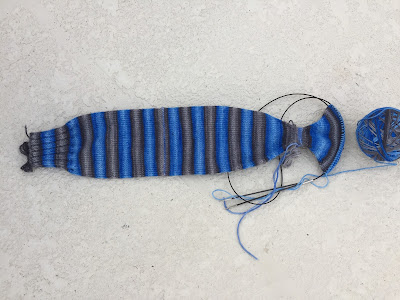 I'm not going to go into the specifics, because I'm planning on writing up the directions for these, but suffice it to say that I'm making them in such a way that there's as much plain knitting in the round as possible. I started these late in the day on Friday and got about an inch of cuff done. Then, on Saturday, we drove to the opposite coast to visit family and I got the entire leg done. Yesterday, we went to a movie and then to have dinner and watch the Steelers game with some friends, and I finished the rest of the first sock and got started on the second. Aside from the toe shaping, these have required virtually no thought whatsoever, so they've been perfect for when we're in the car, watching TV, or just sitting around.

The needles I'm using are new to me: Knitter's Pride Karbonz. I picked them up to try when my LYS was having its big going-out-of-business sale, but they've been sitting the bag ever since. My opinion of them is somewhat mixed. I really like the tips and the cable, which is less flexible than some of my other sock-sized circular needles but really has no memory. What I like less is the carbon fiber shaft of the needles. Although I don't seem to be getting chills from them as I feared, I am finding that they have quite a bit of drag compared to my usual metal needles. I've adjusted to this by now, but at first I found that my knitting was a lot slower because I had to spend more time moving the stitches along the length of the needle. So I doubt these will replace my beloved Sock Rockets, but I can see them being in a regular rotation. And I'd definitely like to try some other Knitter's Pride needles now.
Posted by Sarah at 4:29 PM