I confess to being more interested in my book in the past 24 hours than my knitting, but nevertheless progress continues. My socks (thanks to being taken out and about yesterday and to the movies again last night) are approaching the 75% complete mark: 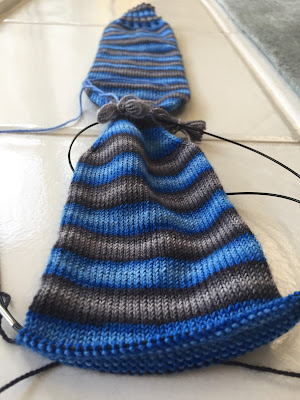 I predict these will be done by the time the week is out, and I'm glad I decided to bring this extra skein of yarn along with me. I'll be heading home with two pairs of socks!

Rainbow's cardigan is also approaching a critical point. I have officially finished the cabled yoke, which means I've been able to set aside the charts, making the whole project much more portable (even if I'm only toting it around the house). I'm now in the middle of a series of short rows, presumably designed to raise the back of the sweater a bit, after which I'll knit two more rows and then be ready to split for the sleeves! 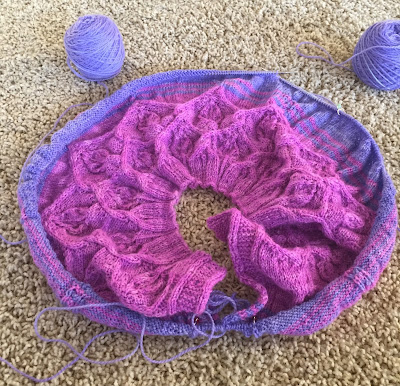 Thus far I've been alternating skeins every two rows, but once I split the sleeves from the body, I'll be using one skein for the body and one for the sleeves (I'm using two mini skein sets, so I have two balls of each color in the gradient). There may be a slight difference in color between the two sets, but I don't think it will be so noticeable given the space between the body and sleeves. There is some shaping in the body, but not very much, so once I get past the split the knitting should be fairly mindless and faster (or so I hope!). I'd say my hope of getting this sweater done by the end of the Gift-a-long are pretty much impossible; even if I did nothing but knit for the remainder of the vacation, I'm not sure that would be enough. But I do want to get it done sooner rather than later so that Rainbow can wear it while it fits and it's cold enough to wear a wool sweater.

We've got three more days of vacation in Florida, and I'm trying to soak up every minute. I spent today sitting by the pool and got a little more than 100 pages of my book read (with a brief nap somewhere in the middle). This evening, I intend to work on both projects and read a little more before turning in. If only every day could be like this!
Posted by Sarah at 5:13 PM