I Can Quit Any Time

Over the long weekend, I came to a little bit of a realization: I may be addicted to mosaic knitting. Now, I know what you're thinking: How can this possibly be a problem? Well, my friends, I'm here to tell you that it's not necessarily a problem -- until, that is, you start ignoring or even outright neglecting your other projects.

First there was the Turkish Tiles dishcloth, which had some errors in it because I was new, but I was nevertheless quite enchanted with the technique.

Then there came the hedgehog and its insane adorableness: 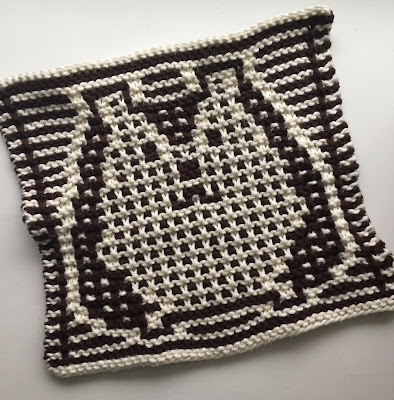 And now I'm knitting a pie:

I really didn't expect to have this much done by now, but apparently when I start knitting on this, it's hard for me to stop, and now it's looking like it'll be finished up in the next couple of days. I really should be working on a design sample right now, one that was started last year (well, in December), but all I want to do is a dishcloth. In cotton. Who am I?

I am going to finish up this latest project (because it needs to be done anyway for a knitalong) and then take a break, though Rainbow has been dropping heavy hints that she'd love another cloth with a sloth on it, and as I haven't found a pattern for one, that means that I'll have to design it myself.

I had hoped to do a lot of reading over the weekend, but I was (ahem) a bit distracted. Even so, I'm now more than halfway through a good read, The Extraordinary Life of Sam Hell. I know one of you recommended it, but I can't remember who it was, so if it was you, thank you! It's been just the easy and enjoyable read I've needed.
Posted by Sarah at 9:40 AM