Given that I describe myself as a "recovering sock addict," it seems perfectly appropriate that my first finished project of the year is a pair of socks. They're also the first thing I can cross off my 20 in 2020 list! 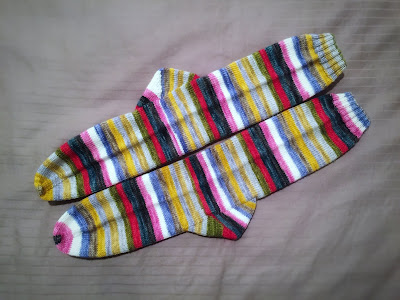 These were cast on to be my Christmas Day movie knitting; the other socks I had on the needles at the time were patterned and thus not suitable for knitting in the dark. I cast on and knit the cuff only that day and then got about four inches of leg done in the movie. I think the first sock was finished on New Year's Eve, because the Mister and I went to see The Rise of Skywalker on New Year's Day and I worked on the start of the second sock during that. The majority of the second sock was knit on the plane on Saturday, and it's probably the reason I didn't completely lose my mind during that long delay!

The modification I made to the heel is the same one I did in my last pair of Non-Euclidians. Instead of working the decreases as described in the pattern (which are done while working a flap back and forth under the heel), I resumed working in the round after turning the heel and worked mirrored decreases toward the center of the sole, starting at the edges of the stitches left after the heel turn. It's a bit hard to describe, but I think it makes much more sense if you look at the socks.

I'm still working on the other socks, which are a new design that will be released next month; I should start the heel during lunch today. I've also got another design sample on the needles (you saw a peek at it last week -- it's the sock yarn held together with mohair/silk), but I'm already plotting my next cast on. I'm late getting on the mohair/silk bandwagon, but I'm solidly on. 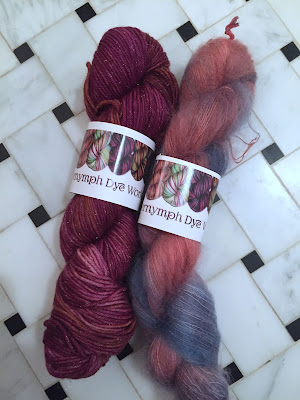 The skein on the left is a OOAK skein of FDW Beguiled, a 75/20/5 blend of superwash merino, nylon, and Stellina, that I got in my grab bag last year. I thought I'd use it for a hat for me, but that was all the thought I'd given it. And then I so enjoyed knitting Rainbow's Neon that I thought I'd use it for one for myself, but I'd kick it up a notch in the warmth department by holding a strand of mohair/silk alongside the DK. Lisa just so happened to be having an end-of-year sale, so this skein of Floof in the colorway American Rust found its way to me (along with a few other things that I'll share once I have decent light to snap some photos). I think that these two yarns together are going to look pretty amazing and be extremely warm, which is what I really want for walking to and from work in the winter. I mentioned my plan to Rainbow, and naturally she also expressed interest in having a hat with some mohair, so it appears this skein will be doing double duty -- luckily there's a lot of yardage in this 50 g skein!
Posted by Sarah at 9:36 AM