I know some of you have been waiting for this post for a while, and I'm sorry that I'm posting it so late in the day, but Rainbow and I had an orthodontist appointment at 7:15 this morning, after which I took her directly to school, and then I had to wait until after school for photos because she is now my official photographer!

But before I get to the FO in question, I wanted to say thank you to those of you who purchased patterns on my birthday. When I came up with the idea for the fundraiser, I though maybe would raise $100, but I thought that might be stretching it. I suppose I really underestimated the generosity of knitters, because when I sat down yesterday morning to total up all the sales, you could have knocked me over with a feather when I saw the final number. Rounding up to the nearest $5, I was able to make a donation of a whopping $515 to the International Rescue Committee, which their website tells me is more than enough to equip a mobile clinic. I should also mention that my father saw my mention of this fundraiser on Twitter and was really touched by it; it was his father who came from Kyiv, and as he said to me, if things had been just a little different, he might be there today.

Now, here's what I know you've all been waiting for: My Shifty is done -- ends woven in and trimmed, blocked, and photographed! And I couldn't be more delighted with how it turned out! 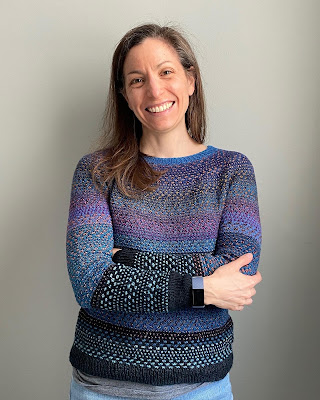 Pattern: Shifty by Andrea Mowry, size 2/34 in. bust
Yarn: handspun in six colorways from Southern Cross Fibre -- First Star, Ice Caves, and Deep Ocean (main colors, top to bottom) and Autumn's Last Breath, Sunrise Sunset, and A New Hope (contrast colors, top to bottom) -- a total of 391 g or approximately 1,316 yards
Needles: US 3 (3.25 mm) and US 1 (2.25 mm)
Started/Completed: September 9, 2021/March 9, 2022 -- yes, I started on my half-birthday and finished it on my birthday!
Mods: added length to the body and the sleeves by repeating the pattern and incorporating a couple more pairs of decreases to sleeves for a snug fit at the wrist

This sweater has been in the works for quite a while. I started the spinning the yarn last May and finished the sixth and final skein in August, but I waited to cast on for the sweater until the Pigskin Party started in September because I thought it would be a big points earner for me (and it would have, had I actually finished it in time). The truth of the matter is that I got distracted by other things, and this sweater got shoved aside for weeks or months at a time due to no fault of its own. The pattern is very clear, and once you have the mosaic pattern memorized and have completed the yoke increases, it's very easy to go on autopilot and cruise down the body. The sleeves required a bit more attention because there were decreases involved, but the way the pattern is written, it's easy enough to check off each section and pop in a decrease when you need to. 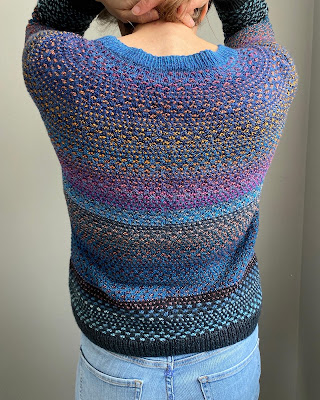 My plan when I was spinning the yarn for this was to use three colorways that were all heavily blue for the main color and to knit them in a light-to-dark progression. The contrast colors all complemented the main colors they'd appear next to. I staggered the change in colors so that the main color and the contrast color didn't switch over at the same time in the hope that the transitions would look a little less obvious, but the nature of handspun being what it is means that I do have some pretty obvious lines where the main color changed over. I really don't mind and I love how the colors change and interact with one another. When I knit the sleeves, I made sure to switch the colors in the same spot that I did on the body; the only difference is that I needed more length in the sleeves, so they have three more pattern repeats than the body. 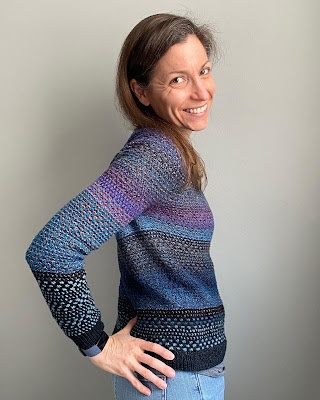 The only real modifications to the pattern I made were the additional length on body and sleeves (I wanted to cover everything -- I run cold!) and to slightly adjust the length of the hems. The body was meant to have 2 inches of ribbing at the bottom but I stopped at 1.5 inches, in part because I wanted to make sure I reserved enough yarn for the sleeves and in part because I was starting to lose my will to live from knitting that much 1x1 rib. For the sleeves, I made the ribbing twice as long as called for (2 inches total) to ensure that they came all the way down to my hands and serve to keep the cold out. I did a tubular bind-off on all the hems (excluding the neckline -- I still have to learn a tubular cast-on) and only managed to botch the last sleeve, which I discovered as I encountered a dropped stitch as I was weaving in ends. I used a Handi-tool to ladder it back up and tacked it back down. I can't even find where that was now, given how dark the yarn is, so I'm leaving it that way and not worrying about it anymore.

While I spun the yarn for this sweater with this pattern in mind, it's also made me think about my handspun stash in a new way. I have lots of single skeins that don't have enough yardage for a garment on their own, but many of them (particularly those spun from fiber from the same dyer, as dyers often produce colors that go well together) could easily be combined to make something bigger. There really is nothing quite like knitting with yarn you've made yourself, and certainly it's a guaranteed way to end up with a sweater that is truly one of a kind.

Finally, I made a little slideshow to show the progression from yarn to project to finished garment. Fingers crossed that this works!