My Life as a Sock Knitter

Tonight my post is nearly all about socks. And about the photos that Blogger wouldn't let me load last night, but I'll get to that in a bit.

When did you start making socks? Did you teach yourself or were you taught by a friend or relative? or in a class?

Believe it or not, the very first knitting pattern I ever bought was a Regia basic sock pattern, at what was my LYS when I was in grad school in Philly. I tried to find the first sock I made to take a picture of it, but I must've hidden it away; trust me, it wasn't pretty. It was more of a Christmas stocking than a sock. I can't even begin to discuss how and where I went wrong with that thing. All I know is that I couldn't make heads or tails of that pattern. It had directions for both a heel flap and a short-row heel, but didn't do a very good job of explaining that you did one or the other. I suspect it was originally written in German and was just very poorly translated, which was compounded by the fact that I was still a fairly inexperienced knitter.

I would say I really became a sock knitter late last year, when I made J his first pair of socks. I did these without a pattern, but at that point had read enough pattern on the Internets that I was reasonably comfortable with making one up. And, obviously, I figured out how to do a short-row heel.

What was your first pair? How have they "held up" over time?

Well, if we're going with that pair I just mentioned as my first official pair of socks, then they've held up very well. They're a bit too snazzy for J to wear every day, so they spend most of their time in his sock drawer and only get worn around the house.

What would you have done differently?

As that pair was knit toe up, I would have bound off the cuffs a lot more loosely or done a sewn bind off. Of course, I didn't know about such things then.

What yarns have you particularly enjoyed?

One of my favorites is Lorna's Laces Shepherd Sock, but because it's on the pricier side I usually save it for "special" patterns or for gift socks. Most of the time I knit with Knit Picks Essential, since it's superwash and cheap. I also love the cotton/lycra blend from Greenwood Fiberworks, which is somewhat of a pain to knit with (little bits of it fall off and tend to stick to you), but the knitted fabric is so, so comfortable.

Do you like to crochet your socks? or knit them on DPNs, 2 circulars, or using the Magic Loop method?

Crochet socks? Never heard of that before. I only crochet afghans. Most of the time I like to work on two circulars, or on dpns if the pattern seems to require it. I've never used Magic Loop for a sock, but only because I didn't think any of my circs were flexible enough. I might try it with some of my new Knit Picks circs, since their cord seems to be very flexible.


Which kind of heel do you prefer? (flap? or short-row?)

I think at this point probably flap, since I think it fits better. When I first started knitting socks, I was all about the short-row heel, because I thought the flap looked funny. I've been reformed.

How many pairs have you made?

I think -- think -- I've made a total of 12 complete pairs, but I also have at least two single socks (half pairs) and three currently in progress.

Speaking of which, you want to see them, don't you? Here's the picture I tried to upload last night (and we know how that worked out): 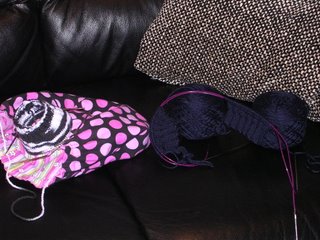 On the left, on top of my sock bag, is my current travel sock, a basic stockinette in Cascade Fixation. I already have a name in mind for this pair, but I'll wait until it's complete so you get it. On the right are socks for my future FIL, to be gifted for the holidays. This is my first pair doing both socks at once on two circular needles, in this case Knit Picks circs. My opinion on these is mixed. On the one hand, doing both at once eliminates any chance of Second Sock Syndrome, and I'm loving the needles with their pointier-than-Addis tips and extremely flexible cord. On the other hand, it's a bit fiddly to do, with all the needles and two skeins of yarn to keep track of. I spend about a quarter of my knitting time on these rearranging needles and untangling the strands of yarn. We'll see if I make it the whole way through on these.

Next up, a peek at another holiday knitting project, this one for my future MIL: 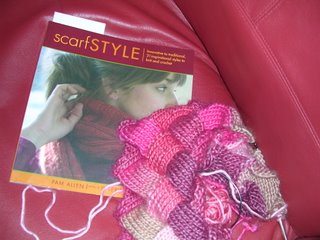 Recognize Lady Eleanor? This is being knit in a quite luscious wool and soy blend by Paton's. Beautiful sheen, great color (reminds me of Noro color changes), and wonderful softness, even though it does shed. 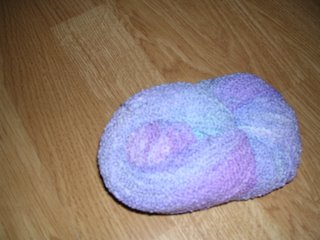 This colorway is called Winter Sky. It makes me think of the purplish color the sky takes on in the winter when snow is coming. This will make another oh-so-comfortable pair for moi.