A Trick and a Treat and Ubiquitous Socks

Seeing what [intentional] felting does to wool never ceases to amaze and excite me. Case in point: pumpkin before felting ... 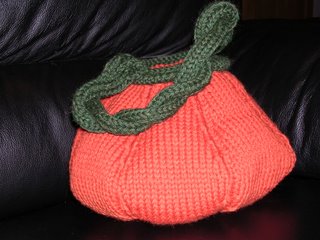 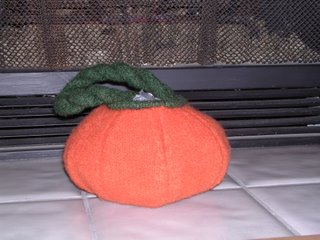 Pattern: 12:01 by Nathania Apple, October '06 MagKnits
Yarn: Cascade 220 (100% Peruvian highland wool), color 7824/Burnt Orange (2 skeins) and color 2445/Shire (1 skein)
Needles: US 8 dpns and circs
Mods: Many. To begin with, I used much smaller needles than the pattern called for (US 8s instead of US 13s, which I frankly didn't have on hand). I also doubled rather than tripled the yarn, which was hard enough on the hands, and added a few extra rows in the middle for some added depth. I have a feeling that this adorable bag turns out much bigger, even after felting, if you follow the instructions as written, but I like this size. It'll stand in for my candy dish on my desk at work for the rest of the month and then might show up as a decoration for Thanksgiving.

Now that I've gotten that out of my system, it's back to the holiday knitting. Specifically, I'm focusing on these right now: 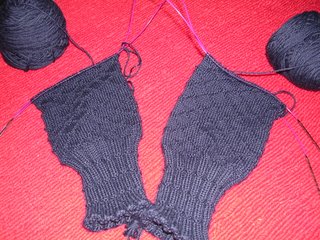 Color is off, as usual (I guess the camera couldn't handle navy yarn against the red rug as a background), but here are the nearly complete legs for the socks for my future FIL. They're relatively slow going at 80 stitches -- well, I guess 160 -- per round and a purled pattern, but at least when I'm done there's no second sock to knit.

Tomorrow is knitting night at the Waterworks Barnes & Noble with, I expect, all the usual characters. I'll be a bit late, as J and I are meeting a friend for dinner down the road, but I will be bringing Lady Eleanor and her pretty wool/soy yarn for attendees to pet. Hope to see you there!