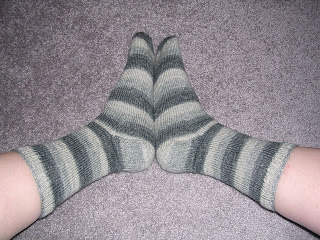 Pattern: Widdershins by Brooke Chenoweth Creel, summer '06 Knitty
Yarn: Austermann Step (75% superwash wool, 25% nylon, infused with aloe vera and jojoba oil), color 22, one 100 g skein
Needles: US 1 12" Addi Turbo circs for stockinette portions, US 2 16" Knit Picks circs for ribbing, US 3 for binding off
Started/Completed: February 24/February 28 (four days baby! fastest socks ever knit!)
Mods: I rewrote the pattern to enlarge the sock circumference, since I knew 54 stitches would never make it around J's foot (or mine, for that matter).

These were a ridiculously fast knit, as the only parts I had to pay attention to were the gusset increases and the heel. I can do stockinette while watching TV, talking on the phone, reading -- probably while sleeping, too, although I have yet to test it.

My favorite part about these socks -- aside from the oh-so-subtle striping -- is the sides of the heel flap: 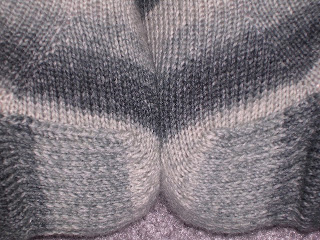 The ssk/p2tog on each side of the heel flap creates a selvedge-type column of stitches that gives such a constructed look to the sock. I love it.

I knit this pattern mostly because I was interested in the toe-up construction of the sock. I was interested to see how a heel flap is done coming from the opposite direction, since my other attempts at toe-up socks have used short row heels. I really liked how this pattern worked out. The gusset increases mimic their corresponding decreases in the standard top-down construction and the heel flap itself is virtually indistinguishable from its counterpart. The one thing I never like about toe-up socks still bothered me with this pair, however: I can never get the bind off around the leg to be loose enough. Although you can see that, going up two needles sizes notwithstanding, the leg is still a bit snug on me, I think it'll be fine on J. He doesn't have my calves.

The real winner in these socks is the yarn. It is delightful to work with. I think I mentioned before that it's a tad bit slick on metal needles, but that didn't much bother me. Its high wool content prevents a dropped stitch from sliding down more than a row, so it's easy to fix. I swear that my fingertips actually got softer as I knit, so I have no doubt they'll work on feet. One of these days (and by that I mean when I've worked my way through the yarn stash and can allow myself to come off the yarn diet), I'll buy another skein and knit a pair of these for myself. Mine, of course, will be colorful!

And now on to cast on a new sock, since this knitter must have a sock in progress at all times.