The Return of 40 Guy

So last night was our monthly knit night and I met up with Jen, Jenn, Besty, and later Lori in the Barnes & Noble cafe. While we were waiting for our favorite eccentric, we also noticed a teenage girl with a brand-new tattoo and jeans so low we saw ass cleavage. We started to worry that 40 guy wasn't going to show, as he seemed to be running a little late. Plus, there was a cop wandering through the store who seemed to be particularly interested in the cafe area, and we all started theorizing that perhaps 40 Guy had gotten his 40 by ripping off a liquor store and wasn't showing up because he knew he was going to be busted if he did.

We needn't have worried: 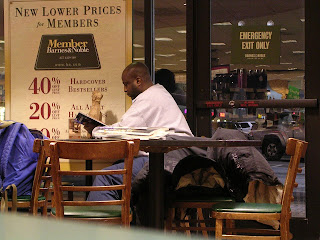 Ah, 40 guy. He never disappoints. Unfortunately, I think he may be onto us, as I caught him looking at us several times. We may need to lay low with the pictures and so forth for the next month or two, just to put him off our scent. (And for the record, I took this shot very sneakily, pretending I was showing pictures already on the camera to Jenn and turning off the flash.)

Meanwhile, I did get some knitting done while keeping an eye out for 40 Guy. First I finished off a sock that had been started last Sunday: 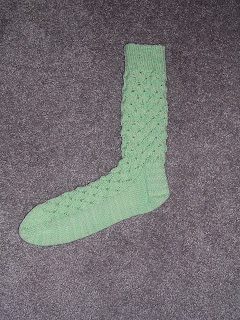 This is the Child's First Sock in Shell Pattern from Knitting Vintage Socks. You may recall that I tried this pattern once before, but ran into an issue with fit as a result of not knowing how to YO correctly. No problem this time; it's a perfect fit, and half of the leg of the second sock is already done.
These socks are only one of several WIPs I've still got going. I started Shedir last weekend with the Brooks Farm Four Play and it's coming along slowly. Hats usually are a relatively fast knit, but this pattern has cabling every other row and rounds that are 128 stitches around (this is worsted weight yarn worked on US 3 needles). 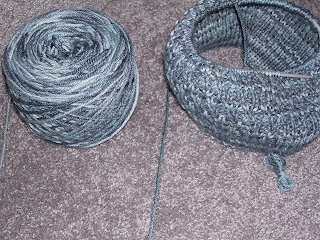 This doesn't look like much, but the pattern is much more apparent when it's stretched out.
the yarn is delightfully silky and soft. It can be a bit fiddly when working the cables as it has a tendency to stick to itself. This was an issue when I wound it into a center-pull ball; I never actually got it on the swift, but instead had to manually unwind it from the hank and then wind it on the ball winder. I'm doing these cables without a cable needle to speed things along, but I have to be careful that I don't drop the stitches when I do.
Finally, there's J's Cambridge Jacket, which is moving steadily along. Here we are as of last night -- back complete, left front complete, right front started, and Elmer for scale: 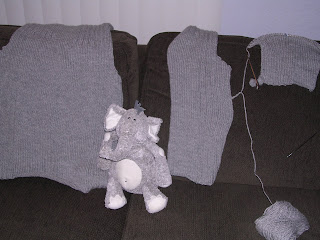 For some reason I've been finding it hard to maintain progress on this project, and I think I've finally discovered the reason -- I'm fine with the knitting of the sweater, but I'm worried of ruining it with shoddy finishing. I still haven't gotten over the disaster of the first sweater, and it would just devastate me to have finally knit J a sweater and have it be another mess. Fortunately the order I placed with Knit Picks yesterday (which contained absolutely NO YARN, I will have you know!) contains what might prove to be my savior: Finishing Techniques for Hand Knitters. That title pretty much says it all, doesn't it? I also ordered Nancy Bush's Folk Socks, a set of US 9 dpns, and a chart holder, since I seem to be so into lace socks these days. Now I just have to keep my fingers crossed those knitters in Leetsdale don't get their hands on the package ...