or, In Which This Knitter Gives In to Temptation.

In a word, the knitting festival was overwhelming. There were many vendors crammed into a relatively small space, which was crowded with knitters. I had to do a couple laps through before I finally was able to select some diet-approved yarn. 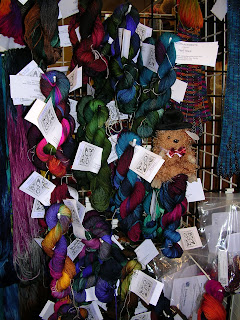 Can you spot the groundhog amidst this luscious selection of Interlacements Tiny Toes? He was there to help Jenn with gauge. I met up with her and her blogless friend Dana after I'd done most of my shopping and was able to point them in the direction of good stuff. We also saw Besty and Donna, who was trying to pry her daughter away from the angora bunnies. I also finally met Cheryl in person.

I'm sure you're wondering exactly what I bought on my first yarn splurge since the diet was enacted, aren't you? Well, who am I to disappoint? 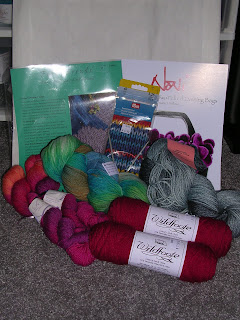 In the background, you can see the two patterns -- the Flower Basket Shawl (yes, I'm aware I'm the last one to the party on this one) and one for a Noni felted bag. In the middle is a US 3 16" circular needle (for a project I'll get to in a second). As for the yarn, I kept myself to only a few indulgences, and for the most part to my self-imposed rule of only buying yarn I couldn't get readily at an LYS. The one exception is the Lorna's Laces (colorway Bittersweet) you see there on the left. Although I could get this easily at an LYS or online, but I thought this was an acceptible exception since it was cheaper than it would be from the other two outlets. The blue/green/tan skein is 450 yarns of fingering weight superwash merino from Autumn House Farm; the colorway is called Skye Sea Garden. The gorgeous silver/charcoal skein is Brooks Farm Four Play, a worsted weight 50/50 wool/silk blend. It's destined to be a Shedir for me, since my Odessa is getting a bit thin and worn out. I'll use that new US 3 circ for this project. Finally, I bought two skeins of the Wildefoote sock yarn (colorway Blue Blood Red) to make another pair of socks for J, who, now that he has his first non-gray pair of socks, has decided he wants more.

Now I've gotten that out of my system, I think I should be good knitting from stash for quite a while. What did you get at the knitting festival (if you were able to make it)?