A Bit of Lace

Today I photocopied the charts for Icarus, but I'm not starting on it just yet. I know that if I cast on I'll get fixated on it and won't pay any attention to anything else, and I'd really like to finish the little Red Sox sweater by next weekend (my aunt and cousin -- Aidan's Grammy and auntie -- will be coming to town, and I'd like to have it done so they can take it back to Chicago with them).

However, I was itching for a little bit of lace, and when I saw this pattern on Ravelry, I thought it would make a good swatch to get my lace fix for the time being. 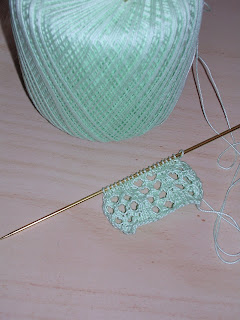 So cute! I'll need to get some white cotton thread for the real thing, or maybe some white laceweight wool or alpaca. I think an animal fiber would certainly open up a little better and stay put better than the cotton, but at least the cotton is economical.

Last night while working on Aidan's sweater I decided that I couldn't deal with all those ends any more, so I wove them all in. As a result, one side of the collar is noticeably stiffer than the other; I'm hoping that this won't be too much of an annoyance. Fortunately the ends are all woven in around the top buttonhole, which may or may not have a button through it when it's worn, but at least it serves as reinforcement. I also joined the second skein of yarn. I figure I have roughly 20 rows left before I start the striping for the lower border.

J's second sock? It's started -- there's about two inches of leg done. Really exciting stuff, let me tell you. It's not ready to have its picture taken just yet. Besides, you know what it looks like, right?

The sweater calls; I'd better get some knitting done while the electricity stays on (darn thunderstorms!). Hope to see those of you in the area tomorrow night!

Also -- anonymous commenter to the last post, who are you? Or am I not allowed to know?
Posted by Sarah at 8:04 PM