We arrived in Hilton Head (well, at our house in Hilton Head) about an hour ago -- in true SJ family fashion, in the middle of a windy rain storm that will turn into whatever is left of Tropical Storm Barry tomorrow. Right now the parents are making a trip to the local Publix for supplies, while J and my brother and I are all sitting around the kitchen table on our laptops.

In spite of the nasty weather, I already really like Hilton Head. The back of the house has several large windows that look out on a bunch of palm trees and several flowering bushes. The house itself is amazing -- four bedrooms, each with its own bathroom (at this point I feel I should mention that we are renting this house, we do not own -- I only wish!). We've got the parents at one end of the house and the kids at the other, with plenty of comfy living/lounging space in the middle. If this rain ever ends, I think we'll have a great week.

But enough dilly-dallying. I know you're all wondering how much knitting I accomplished on the trip down. I was extremely productive yesterday, until we stopped for dinner at an Outback Steakhouse somewhere in West Virginia and were there about two hours, meaning that once we got back in the car the daylight was fading fast. Still, I got enough done that I was able to finish this up at about 9:05 this morning, not long after we got started: 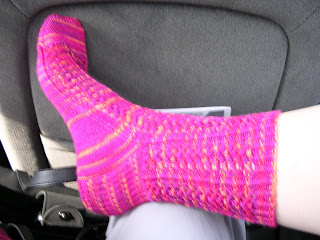 It's a little blurry (the car was moving), but that's a completed Hedera (aka Sock with the Largest Gussets Ever) in Lorna's Laces Shepherd Sock in colorway Bittersweet. This is the first of the pair, but I didn't cast on for the second right away because I needed a break from the lace and, as I told J's mom last night as it became too dark to knit, if I were knitting straight stockinette I wouldn't have to look at what I was doing.

So, instead, I cast on for an ankle sock for J in a very guy-friendly plain stockinette. I knit almost the whole rest of the ride down (except for about a half an hour when I took a quick nap and the hour or so we stopped for lunch), and basically the minute we got into the house I put my bags down and finished weaving in the last end of this: 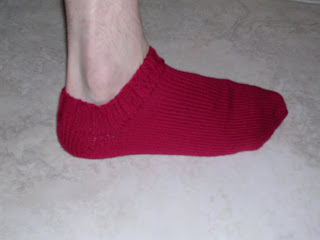 Again, a little blurry. I blame user error for this poor quality (I was squatting down to get a shot of J's foot on the floor). This is Louet Gems in a colorway called Cherry Red. J tried this sock on with his shoes and proclaimed it a perfect fit. How can I not cast on for a mate for this one?

So, for all of you keeping track, that's two socks completed. Never fear, there's plenty more sock yarn to be had, and if this rain keeps up, I won't be tempted to do anything outside -- or, I should say, I won't feel guilty for staying inside with my wool!