One of Those Moments

All during my knitting time yesterday, I was cruising through my first Koigu Embossed Leaves sock. By the time I was done with dinner (yes, I knit during dinner, you got a problem with that?) I was through six and a half repeats of the pattern. I figured I'd be able to finish it up during lunch today, so I put it down in favor of Aidan's sweater for my evening knitting.

By the time I was ready for bed, I was feeling very satisfied with myself because I'd managed to finish the second sleeve of the sweater but for weaving in the ends. (You want to see a picture of that, don't you? Okay, here you go.) 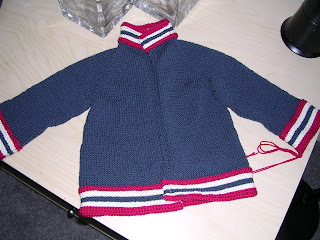 I'd been knitting in bed, so before I could go to sleep I took the sweater and bag 'o yarn back up to loft/craft area. As long as I was up there, I decided to grab the second skein of Koigu for my socks, since I was so close to finishing up the first one and didn't want to get caught with knitting time and no yarn at work. I opened the sock yarn drawer of my little yarn storage unit and reached in for the Koigu -- and that's when I made the unfortunate discovery that caused the *palmhead* moment.

You see, I had been knitting with the wrong Koigu this whole time. Several months ago I'd purchased an orphan skein of Koigu from the discount basket at Knit One with no real project in mind, but I thought it could at least serve as heel/toe contrast for a future pair of socks. It was a similar colorway to the yarn I'd intended to use (not surprising, since I seem to always tend to pick out the shades of blue and green), but not similar enough that I could get away with having one sock in each colorway. For some reason, when I pulled this first skein out of the drawer, I didn't think to check the tag to see if it was the right colorway, nor did I even notice that it wasn't sitting next to a second skein that was identical. 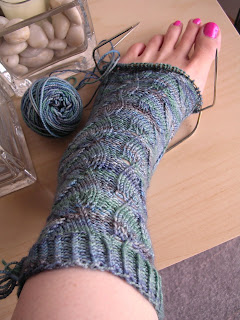 And the start of a sock in P429, which is what I'd thought I was knitting with all along. 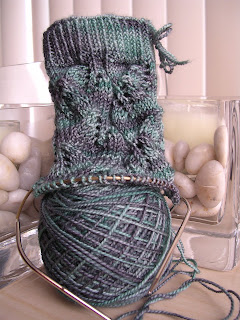 It's a good thing I really like this pattern, and that the pattern goes quickly, and that the yarn is pure heaven to knit. Since I'm so close to being done with the original sock, I think I'm going to put the stitches on scrap yarn and save it, just in case I come across another skein of P531 (anyone have a spare skein in their stash?).

Tonight's agenda, after vacuuming and scrubbing the bathroom for this weekend's houseguests, is weaving in the ends on Aidan's sweater and then knitting the miniature socks for the front panel. At least this time I know that I'm using the right yarn.
Posted by Sarah at 8:15 PM