Finished: Too Much Work for Such a Small Sweater

I certainly hope the recipient of this sweater gets a lot of wear out of it, because I will not be knitting this pattern ever again. 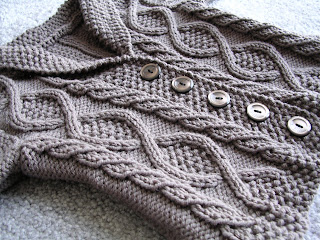 This sweater is adorable, but it was way too much work for such a small sweater -- maybe even too much for an adult-sized sweater.

The knitting itself was fairly straightforward but required a pretty high level of attention given the cabled patterning. I cabled without a cable needle with the exception of the center cable crosses (worked over five stitches), which certainly helped speed things along. While the yarn wasn't the most pleasurable to knit with, given its high cotton content, it worked well with the pattern and makes for an extremely baby-friendly garment. The buttons are a pearlized brown plastic -- neutral but not cheap looking, in my opinion. 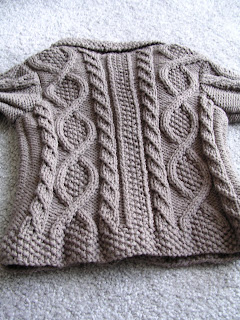 For those of you who might be considering knitting this sweater, here are a few words on its construction: The sweater is knit in five pieces (back, two fronts, and two sleeves). The lower hems and button bands are knit in seed stitch, and the background stitches on the cabled portions are worked in reverse stockinette. The button band stitches are placed on a holder at the beginning of the neck shaping and are later picked up and knit in seed stitch to form the collar. The two pieces of the collar are then grafted together at the back of the neck and the entire length of the collar is sewn to the neck opening.

The collar is what gave me the most trouble. I couldn't find any resource -- online or in a book -- to help me graft seed stitch, so I had to wing it. It turned out okay to the untrained eye; a more perfectionistic knitter than I would have ripped it out and tried again until it was perfect. By the time I reached this stage of the sweater, however, I just wanted it done -- and I figure that in its location at the back of the neck, that particular seam is not going to be scrutinized. I then used a row of single crochet to attach the collar to the neck opening for some added stability and shape to the top of the sweater.

So, in spite of how cute this turned out, there are several reasons why I didn't like this sweater. You all know how much I dislike seaming. With this project, I discovered that I really don't like seaming reverse stockinette. I also didn't like the way the increases in the arms looked in reverse stockinette, and I didn't like trying to seam seed stitch. I didn't like how much finishing was involved for such a small garment. That said, the amount of time I spent finishing (seaming, weaving in ends, sewing on buttons) was much less than the time I'd spend on an adult sweater, and I do love how the sweater looks. The pattern was pretty clear and easy to follow, but I'd rather spend my time knitting something else -- especially something with less work to do once the knitting is done.
Posted by Sarah at 10:08 AM