Hannukah officially started at sundown this evening. We had a fairly low-key celebration, if you can call it that. We'd already agreed that we weren't going to really exchange gifts; The Mister was going to pay for my 2008 Rockin' Sock Club membership as both my Hannukah gift and my birthday present, and he knew he was getting a couple pairs of socks I'd finished earlier in the year as well as his Seamless Hybrid (which he got a little early). When I presented him with one of the pairs of socks, he had a little surprise for me. A wooly little surprise -- this guy: 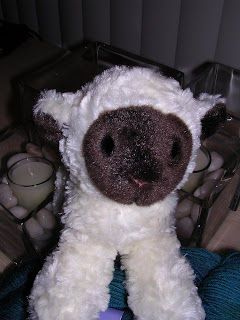 Isn't he adorable? He's very soft, so I've decided he must be a merino sheep. I've named him Baaaahb (get it?), in an homage to everyone's favorite Ravelry mascot. (Strangely, he goes rather well with the little Hannukah gift I ordered for myself yesterday. I'm really not sure what came over me and caused me to click and order, although I think part of the blame lies with Jen, who kept talking about her research into spinning when the girls were here on Saturday.)

Now, as cute as this little lamb is, he's not the Hannukah miracle. Nope, it would be the other surprise that was awaiting me this evening, and part of it is what he's sitting on. 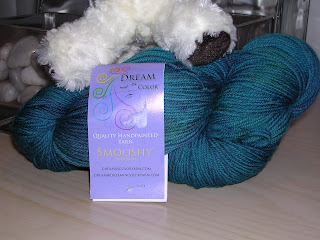 Thine eyes do not deceive you: That is indeed a skein of Dream in Color Smooshy, in a delectable colorway called Blue Lagoon. This photo has actually captured the color quite well -- it looks like a teal, but up close you can see the gentle gradations of greens and blues. It is so me. This came as part of prize package from Devorah (aka Mama Squid) for having the closest guess for the total mileage for the Squid on Wheels this year. She also included two delicious looking Jacques Torres chocolate bars and a fun NYC souvenir keychain. I had no idea what kind of yarn she'd select -- she only asked my fiber and color preferences. I have no idea how she knew I'd been coveting the Smooshy! Thank you, Mama Squid!

Just a reminder: Tomorrow is the first Wednesday of the month, which means knit night for the Hurricane Knitters. Come and join us!

ETA: Damn you, snow, cancelling our knit night!
Posted by Sarah at 7:50 PM

Email ThisBlogThis!Share to TwitterShare to FacebookShare to Pinterest
Labels: Smooshy