The finishing has been fast and furious here the past couple of days, including some last minute knitting and some very last minute blocking yesterday afternoon in order to finish up gifts for my parents (and give the finished items to them last night at our family Hannukah party). I'll try to keep the commentary to a minimum and just give you the facts. 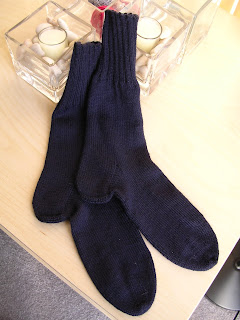 Very straightforward, and would have been very fast to knit had I not picked up all the other projects in the middle of knitting these. 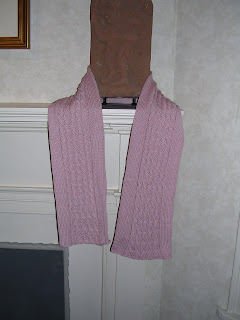 This scarf was knit in the round, mostly in stockinette, with a cabled panel on the "right" side. I designed an interwoven cable for one end and transitioned to 2x2 cables that gradually got longer (i.e., I increased the number of rows between cable crosses) as they moved toward the other end of the scarf. Here's a closeup of the two ends so you can see the effect: 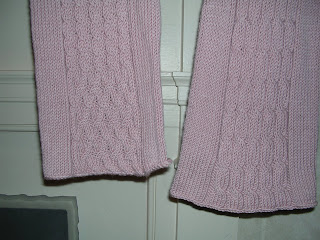 I am not in any rush to knit a tube scarf again. They're incredibly warm and are aesthetically pleasing because you can't see the wrong side, but they also take a really long time to knit and eat up a lot of yarn. In hindsight, I probably had too many stitches around, and even though I used almost every bit of the five skeins of yarn, the finished scarf (before blocking) was a mere 46" long. I didn't have time to wet block, which is what I really wanted to do to maximize the length, but giving it a light spray of water and a good long steam managed to get it to a full 5 feet of length.

This last FO was an unplanned project that I cast on for late yesterday afternoon in anticipation of meeting our friends' newborn son today. 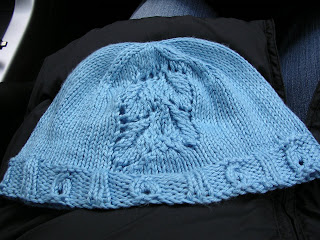 This picture was taken in the car on the way to meet baby Tyler, and the hat is still damp from washing (for some reason a spin in the dryer didn't work). It's way too big for him now, but I told Tyler's mom to throw it in the washer and dryer to get it to shrink a little bit, and it should fit better by the time he's big enough to wear his matching sweater.

So, now I'm all caught up and the holiday knitting is officially complete. I do want to thank all of you who gave me good tips on spinning and spinning resources. I'm definitely going to continue to explore this new fiber hobby, but I've also got a lot of baby knitting to do. I think I may sign up for the spinning workshop for the Pittsburgh Knit & Crochet Festival in February (anyone care to join me?) by which time I hope to have completed many cute little things. And, if by then I decide I really like this spinning thing, a couple months will give me some good time to start a wheel fund!