Time Is Running Out

How on earth is it December already?! I really feel like I missed a month somewhere along the way. There is a lot of knitting left to do and not much time left in which to do it.

I spent most of last week making novelty yarn scarves for my office hallway sale. I was a little disappointed that only about three of them sold (leaving me with many more novelty yarn scarves than I'd like), but I was happy that I made a good chunk of change that's going to a good cause.

This week there are three projects that will take up my time. The first is the miniature sweaters (and socks) for ornaments to be sold in my coworker's gallery. Her holiday "open house" is this Saturday, so I've got to finish up as many as I can by Friday. As of this morning, there are six completed sweaters: 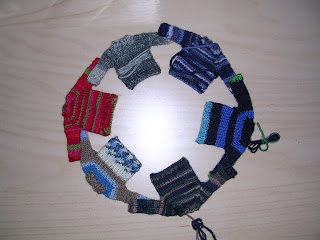 For some reason I can imagine the sweaters singing "Kumbaya"
I've completed only a few socks; something tells me that people will think pint-sized sweaters are a lot cuter than miniature socks.

I'm also trying to finish up the gifts for my parents. Although Hannukah starts this Tuesday night, we're not doing our family celebration until next Saturday night, so that buys me some extra time. I finished up the first sock for my father last night and cast on the second this morning. It's a basic stockinette, so I'm not worried about finishing. The real nail-biter is going to be the tube scarf for my mom. I worked on it for about four hours yesterday, when I had the girls over for an afternoon of knitting. It's about halfway done: 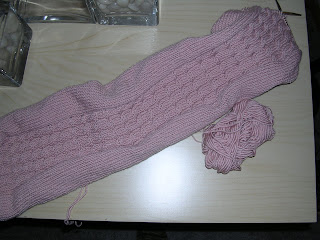 This will need a good blocking before it goes to her, and it will probably need a couple days to dry, which means that the knitting needs to be done by Thursday. There are two skeins left to be knit after the present one, so if I can manage to knit a skein's worth of yarn each night I'll be okay.

Of course, once I'm done with all the holiday stuff, there are all the babies to knit for. Two are due next month, four are due in March, and one is due in April. And then there's my aunt's sweater to knit (at least now I have the yarn for that). Oh, and a pair of socks for a swap to be knit this month and mailed out the first week of the year. It looks like it might be a while before I can cast on for me again -- I suppose Tangled Yoke will have to wait a bit!
Posted by Sarah at 8:46 PM